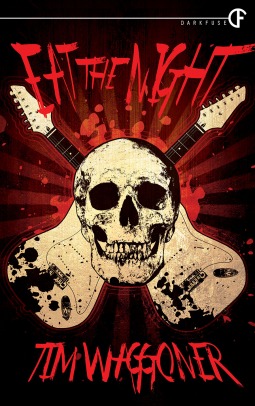 I really enjoyed Tim Waggoner’s two books in his “Shadow Watch” series and so was eager to catch this dark fantasy/horror novel, Eat the Night, published by Darkfuse – one of the leading publishers of dark tales.

Joan Lantz has been having troubling dreams of a mass suicide in the jungles of Suriname – led by a rocker named Mark Maegarr –  which occurred years before.  Then she discovers a previously-unknown room in her basement.  Are the two connected?  Joan gets help from The Agency – an under-funded, short-on-man-power organization that might just be the only thing between humanity and the end of everything we know.

Throughout it all, the death-metal lyrics of Maegarr permeate the novella as a sort of creepy, haunting score to Joan’s life and entropy facing the world at large.

That’s a concept that on the surface seems like such a great one for a dark fantasy novel, but once you start to talk about it takes you out of the mood and that’s what happened here for me. Despite such a short book and the inclusion of music/lyrics – something that I typically relish in my literature – I was drawn in to the story very early on, but quickly stopped caring as The Agency got involved.

I’m only familiar with Waggoner’s two Shadow Watch books which were paced well, highly original in concept, and while not as dark as Eat the Night, still wonderfully creepy, and so I had high hopes for this work as well.  Unfortunately I just never really got into this.

For me, I’ve discovered, I like character-driven stories.  This book is concept-driven and the characters, Lantz, Maegarr, and the Agency are there to move the idea of entropy and the Agency’s battle forward.  It’s a small difference, but just enough to keep from fully enjoying this book.