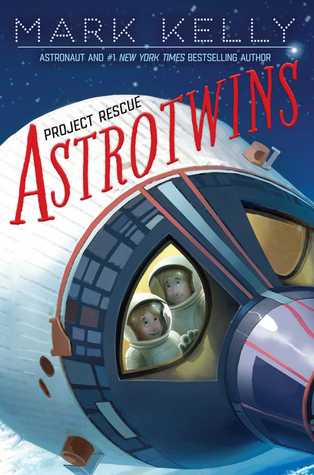 A children’s book about pre-teen astronauts written by an actual astronaut?!  Heck, yeah!

It is 1976 and the Cold War and Space Race are in full swing.  Twin brothers Mark and Scott Kelly are bright and curious and along with their friends Barry and ‘Egg’ and their grandfather (from whom they appear to have inherited their curiosity and general trouble-making) they have put together a working spaceship from some left-behind scraps from a discarded NASA storage space. Some of them have already made a journey into space (in a previous book, Astrotwins: Project Blastoff).

Cosmonaut Ilya Ilyushin will die in space, trapped in his Soyuz capsule, unless something can be done.

But it’s the 1970’s.  No one else has the ability to put a ship in orbit other than NASA and the Russian space administration.  No one except the Kelly twins and their friends, using cast-off NASA pieces!

After some very careful planning and with one of their group traveling to Russia to help coordinate the rescue efforts, twins Mark and Scott blast-off and plan an extra-vehicular activity – a spacewalk to the Soyuz ship to retrieve Ilya.

The book does a really nice job of capturing and explaining some of the 1970’s (in particular, what the ‘cold war’ was).  It also does a fine job of portraying the energy and excitement of a youngster and the belief that all things are possible.

Clearly there’s a lot of fiction here, and I absolutely loved author Mark Kelly’s note at the end of the book stating that even as smart as he and his brother were, they weren’t likely to have ever gone into space without the training of NASA.  Of course this wouldn’t have been able to happen, but it appeals to a youngsters desire to be an astronaut, to explore and to do something that most adults haven’t done.  It certainly appealed to the 12-year-old in me.

And as I stated in the beginning, the fact that this was written by a twin astronaut only makes it so much more interesting.

The downside to the book is that it’s set in the 1970’s.  It makes a lot of sense, given the story-line, but it could almost as easily have been set today.  Although the U.S. and the Russians work together on the International Space Station there could still be a need for a rescue that only the ingenuity of the youngsters could manage.

Still, this was a real treat and should have great appeal to any youngster who’s ever looked at the stars and longed to explore.

Looking for a good book? Astrotwins: Project Rescue by astronaut Mark Kelly is an exciting historical adventure for elementary and middle school students that will appeal to a sense of adventure and the interest in the space program.