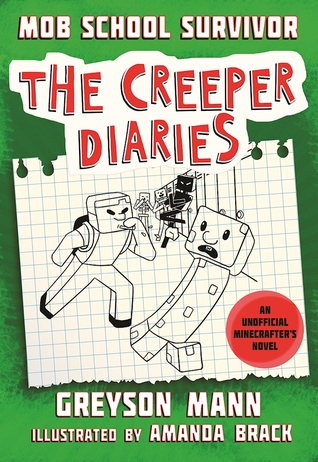 I read a lot of children’s books and books for all reading levels but I will admit that since my own children are now adults I am not as familiar with children’s entertainment (television, video games, etc) as I once was. This book appears to take off on the popular ‘Minecraft’ gaming series.  It’s a game I’ve seen played (briefly) but know nothing about it.

However…a good book should have certain qualities no matter what the themes and story-lines and this one just doesn’t have what it takes.

I’ll start with humor….  This is intended to be funny – to appeal to the same reader that would laugh uproariously over a fart or belch – but I found nothing here that even had me crack a smile (I admit…I’m a tough audience).  The book starts with our central character introducing himself (Gerald Creeper, Jr.) and complaining that his mom makes him eat brussels sprouts and then he and his mother do a rap song.  And then there are the ‘laugh out loud passages’ such as:

Dad says I’m a “pacifist.” The first time he said it, Chloe laughed. “Gerald sucks a pacifier,” she said, pointing at the rubbery thing Cammy sucks on.

Despite being a Creeper, Gerald has many of the same problems that our average fifth grader might experience – bullies, being given awful nicknames (“Itchy”), and having to deal with affectionate cows.

Bottom line – I was bored and not amused.  I can’t recommend this.  I give it as much as two stars because I’ll consider that there’s something important I am missing by not being familiar with Minecraft.

Looking for a good book? Mob School Survivor by Greyson Mann is targeted toward elementary school readers who enjoy computer gaming, but doesn’t reach up to their level of interest.

I received a digital copy of this book from the publisher, through Edelwiess, in exchange for an honest review.

series: The Creeper Diaries, Book One