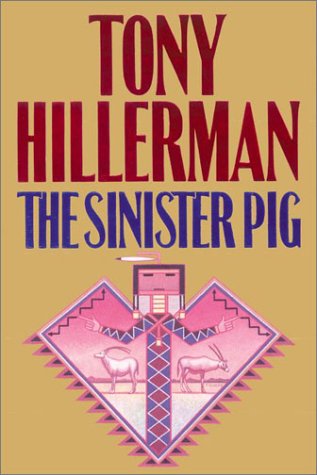 Not everything I read is an ARC … I’m a pretty dedicated library user as well.

I’ve long been a fan of the American Southwest.  It is one of my favorite places to visit and vacation.  I’ve also been aware that Tony Hillerman – a name that any bibliophile should recognize – writes mysteries set in the American Southwest.  So why haven’t I read his works before this? Mostly I think it’s because I’ve only recently developed an affection for the mystery/thriller genre.

Although sixteenth in a series, I don’t get the impression that reading the previous fifteen books in a necessity to enjoy this.  The reader is likely to understand some of the character relationships that have developed over the course of the series, but the story itself seems to be contained within the covers.

Bernadette “Bernie” Manuelito once worked for the Tribal Police but now is a Border Patrol/Customs Officer.  She quickly develops a reputation for herself and while helping out some stranded border-crossers, she is told that a photo of her has been circulating around Mexico, identifying her as potentially dangerous and someone the criminals might want to be rid of. She becomes a target when she visits an exotic game ranch which was once a station for a gas pipeline.   Unknown to Bernie, but figuring it out when he learns she’s become a target, is Sergeant Jim Chee, who is madly in love with Bernie.  The old pipe lines might be in use to smuggle something in to the country. But knowing what is being smuggled and who is the force (and money) behind the operation, is something that brings even more danger to Bernie, Chee, and Joe Leaphorn.

I found this to be pretty standard (and average) mystery/thriller fare. The bad guys were appropriately bad, but they also seemed sort of ‘Bond’ bad – stereotyped bad guys.  Wealthy, white, powerful, connected.

I found the set-up really interesting and the regular characters pretty believable and worth following for a couple more books at least, but I was disappointed in the ‘resolution’ of the story.  I’m not real fond of the deus ex machina  ending or the dumb luck/getting out of a jam because of something or someone completely outside of the protagonists control.

As I say, this was pretty average.  It often felt very dated, not just but how characters were acting, but how they were being portrayed.  I’ll read a few more and see how I feel about the series.

Looking for a good book?  The Sinister Pig by Tony Hillerman is a pretty average mystery set in the American Southwest.