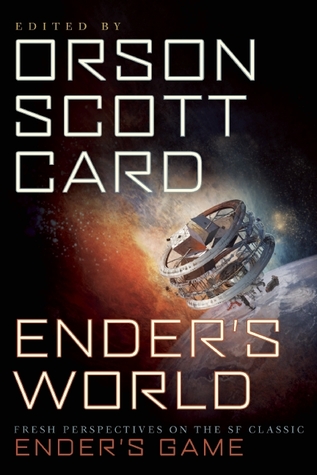 You know a work of literature has achieved ‘classic’ status when there are books of essays about the work being published.  Orson Scott Card’s Ender’s Game qualified as a ‘classic’ a long time ago, but this collection of essays on various subjects within and about the work, cements the status.

Card himself edits this collection (which strikes me as just a little bit odd and likely doesn’t get quite the diversity one might wish for in such a collection) and provides a series of Q&A’s between essays.  It can certainly be argued that no one knows the work better than the author and I probably enjoyed Card’s responses to frequently asked and insightful questions as much as some of the essays.

I can not say that I have a favorite essay from this collection.  Most offered some interesting insight into the book or the characters. But at the same time, none of the insight is earth-shattering or of such significance that it makes me want to dive in and re-read the book.  I was especially pleased with Mary Robinette Kowal’s “The Cost of Breaking the Rules” and Aaron Johnston’s “Rethinking the Child Hero.”

Most of the essays are quite typical and pretty much what you would expect from a writer’s perspective of another’s work.  The interesting surprise comes from the military side, with Colonel Tom Ruby looking at the work from a very unique perspective.  And John F. Schmitt’s essay “Ender Wiggin, USMC” told of how the author used the book to change the way Marines fight. These were easily the most interesting essays in the collection and perhaps some of the most interesting essays on a work of literature that I have read.

Whether you’re a fan of the book or not, if you enjoy reading others’ insight into books, this should appeal to you.

Looking for a good book? Ender’s World is a collection of essays (edited by Orson Scott Card) that explore some of the characters and themes in the classic sci-fi work, Ender’s Game.