IN SUNLIGHT OR IN SHADOW – Lawrence Block, editor 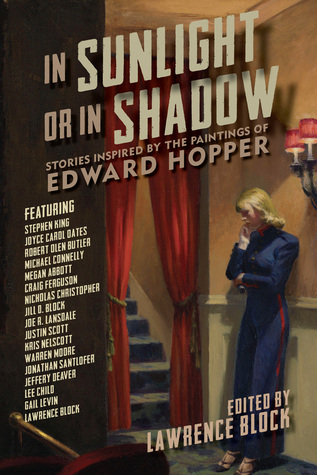 This is a brilliant concept – let writers create stories based on paintings by a well-known artist.  In this case writers use the works of Edward Hopper for their inspiration.

Editor Lawrence Block has pulled together an impressive list of authors but as with nearly any anthology, there are some stories that really stand out and others that sort of fade into the background.  The painting that each story is based on is included in the book.

Although not every story struck a chord, there were some that stood out.

“The Story of Caroline” by Jill D. Block grabbed my attention right off the bat and I was engrossed in the story.

“Soir Bleu” by Robert Olen Butler really impressed me, though I would admit that the painting might have had something to do with that. In some ways, this painting was quite unusual compared to the other Hopper works in the book.

Craig Ferguson’s “Taking Care of Business” reminds the reader that Ferguson is not only a talented stand-up comedian and talk show host, but a gifted writer as well.

I really enjoyed “The Projectionist” by Joe R. Lansdale.  Lansdale’s is a name that I find keeps popping up when I list my favorite stories in a collection.

Warren Moore’s “Office at Night” just might be the best story in this collection.

“Still Life 1931” by Kris Nelscott was quite an enjoyable read – but don’t be confused…that’s not the title of the painting she was writing about.

“Night Windows” by Jonathan Santlofer was a compelling read and perhaps my favorite painting in the collection.

“A Woman in the Sun” by Justin Scott was simple and powerful and I feel perhaps best captured the story in the painting.

I really liked the concept behind this collection, and as with nearly any anthology, there are hits and misses but the hits are plenty and this is well worth reading.  Although Edward Hopper’s work lends itself so beautifully to the concept story, I would very much like to see this idea continue with other artists’ work.

Looking for a good book? In Sunlight or in Shadow is an anthology of short fiction inspired by the paintings of Edward Hopper, edited by Lawrence Block, and is well worth reading.

In Sunlight or In Shadow