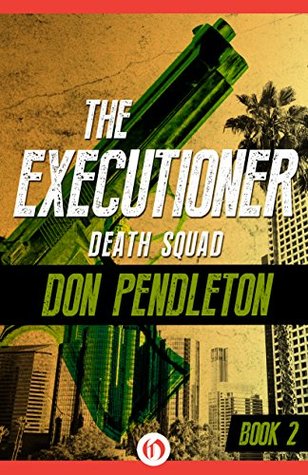 I continue to be surprised by this series. I had expected that each book in the Executioner series would be a unique story of Mack Bolan taking on the mod.  It is, sort of, but it’s also a much more sequential book, meaning it’s very helpful to have read the first in the series to really pick up on what’s going on.

Mack Bolan is a Vietnam war hero.  He’s one of the best sniper’s in the military.  He is able to detach himself from the human part of his emotions when killing a human target.  But Mack has to return to the United States to bury members of his family who died as a result of actions taken by the mob.  Bolan then goes on a one-man-army crusade to take on the mob.

Well…except that it’s not entirely a one-man army.  In this book Bolan recruits a number of vets, all who have had trouble readjusting to life in the United States in a time when Vietnam vets aren’t particularly welcomed by society.  Bolan, also known as The Executioner, puts together his own “Death Squad” to take on some major mob targets.  Those targets are in the Los Angeles area.  The Los Angeles police, aware of Bolan and his skills, prepares a special unit devoted just to the capture or otherwise stopping of The Executioner, learning, only a little too late, of all the other members of the squad who are now helping Bolan.

What makes The Executioner a little different from the ‘average’ serial killer, is that he works on a very special, moral code meaning that only the ‘bad’ guys get killed and good cops are to be avoided at all costs.

As one might expect from a book about an ‘Executioner’ – there is plenty of violence, but surprisingly very little gore.  In today’s literary world of flesh-dripping zombies and blood-sucking vampires, gore is pretty common.  But this book is about a man with a strong morality on the one hand and a strong drive to right wrongs even if it means stepping over the morality line.  Military training.

Author Don Pendleton does hit the reader over the head with this moral code in order to drive the point home that Bolan is a nice guy, even though he’s killing people.

There is not quite as much non-stop action in this volume because we’re setting up a whole crew of new people (those on Bolan’s side, as well as the cops trying to stop him) in a new location.  But once the action gets rolling it’s fast and furious, as one expects from this sort of pulp action story.

I’m enjoying this series much more than I anticipated and it’s easy to see why it has had such longevity.

Looking for a good book? If you are looking for some thrilling action with a strong central character but want the read to be quick and easy, then Death Squad, by Don Pendleton is just the ticket. But be warned … you’ll probably get hooked on the whole series.