THE CANDYMAKER’S AND THE GREAT CHOCOLATE CHASE – Wendy Mass 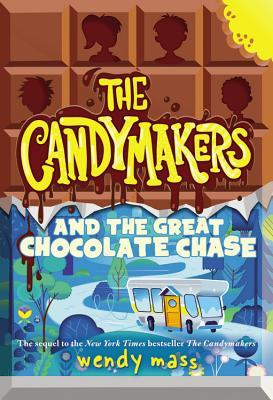 This is a sequel to a book (The Candymakers) that I have not read.  For the most part it seems that we get everything we need to know about the first adventure told to us in this book, making this a stand-alone.  On the other hand, there’s enough of the referring to the previous adventure that it does make the reader feel like s/he is missing out on something.  It worked well enough on me – I bought the first book as I was half way through this (which is just what the publisher hopes).

I was attracted to this book because of: a) the cover (don’t judge me!  if cover art wasn’t important in attracting readers all books would be plain) and, b) the word ‘candy’ in the title.  Who doesn’t like candy?

Four youngsters (Logan, Miles, Philip, and Daisy) have returned to their normal lives after an amazing adventure at the Life is Sweet candy factory (see previous book) where the group had won a contest for a new candy.  Now they are invited back to the factory as the new candy is about to be made.  But Logan recognizes that something is very wrong when he tastes a sample.  There is something very important missing.  The ingredients are exactly the same as what the winning entry listed, but maybe, just maybe, there was something extra special about the cocoa bean that made the chocolate in the contest entry? The group needs to find the missing ingredient before Life is Sweet begins mass producing their candy, or else admit that their winning entry was submitted on false pretenses and lose the contest. Their sleuthing will take them on an extravagant journey to unexpected places.

There was a lot of fun in this book.  The beginning of the book is told from the different view points of each of the four youngsters, giving us an individual look at how each thinks and reacts to different things.  The second half of the book is the group together.

One of the aspects I personally loved was the inclusion of ‘geocaching’ (a world-wide ‘game’ of treasure hunting) that I’ve been taking part in for a decade now but even with millions of people geocaching world-wide, I rarely see it mentioned in books.  It’s wonderful to see it brought to life (and quite well depicted) in a book for school children, hopefully getting them interested in geocaching as well.

I felt the story rambled at times.  The geocaching, for instance, was really interesting and something I enjoyed, but I couldn’t see how it tied to the story.  I’m still not sure other than one instance of mistaken ‘identity’ which also really did nothing for the story other than drag it out a little longer. The book probably could have been about 75 pages shorter and I would have felt I’d gotten a much smoother, tighter, more adventurous ride.

Still, there is plenty to enjoy here, and, as I wrote in the beginning, who doesn’t like candy?  And candy, and the adventure of making the perfect candy is what this tale is all about.

Looking for a good book? The Candymakers and the Great Chocolate Chase by Wendy Mass is a high-spirited adventure for middle school readers that could use a little trimming but is otherwise a lot of fun.

The Candymakers and the Great Chocolate Chase