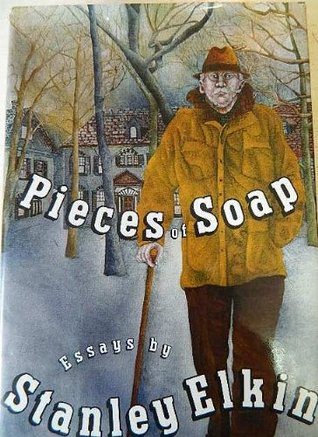 I first encountered Stanley Elkin’s work in the late 1970’s/early 1980’s when Warner Books were releasing his works.  Of course I was first drawn to the books by their covers, then by the descriptions on the back cover, and finally by the works themselves.  I still have those books, tucked away in storage tubs, because Elkin is one of the few authors I just can’t part with yet.  In fact, to this day, when I walk in a book store (new or used) or a library, I always check out the “E’s” for Elkin in case there’s a new release or a book I haven’t read yet, so what a treasure it is to come across this collection of essays – a collection I had not yet read (even though it was first published fourteen years ago!).

Why do I like Elkin?  I like him because he’s unpredictable, in a very gentle, unassuming way. That unpredictability is very evident in these essays.  You just can’t be sure where he’s going or what he’s going to say next when you read these, though you can follow his train of thought and appreciate where he’s coming from.

I like Elkin because of language. Elkin understands and uses words better than most people I know.  But again, he’s subtle. Gentle.  He’s not out using ten-dollar words to show off a vocabulary like many writers I’ve encountered.  Instead he uses just the right word – unpredictably.

He is also kind of brilliant, and finds the small things that answer the big questions.  In his essay on “Plot” I highlighted this passage: “…here’s an elemental ground rule of plot. There may be no good losers in fiction. All characters are essentially sore losers.” No one has ever said that before in any of my writing or English classes, and I haven’t encountered it in any other writing books, but here it is, in a collection of essays.  He concludes this essay with: “Plot is people. But it is never other people.”

And finally, Elkin makes me laugh. He doesn’t tell jokes so much as truths that are funny. (“Writers usually work with protagonists a year or two younger them themselves; to arrive at a writer’s age you add one to two years to a character’s age. We call this Carbon 14.”)

Elkin’s insightful essays are tremendous and a solid reminder as to why I like his fiction so much.  I think it’s time to re-read some of his works.

If you haven’t encountered Stanley Elkin and you like to read, you really should check out one of his book.

“Performance and Reality”
“Plot”
“Acts of Scholarship”
“The Law of Average”
“What’s in a name?”
“The First Amendment as an art form”
“The Muses are heard”
“An American in California”
“At the Academy Awards”
“The Rest of the Novel”
“Pieces of Soap”

Looking for a good book? Pieces of Soap: Essays by Stanley Elkin is a real gold-mine for Elkin fans and wonderful reading for anyone who enjoys reading essays.