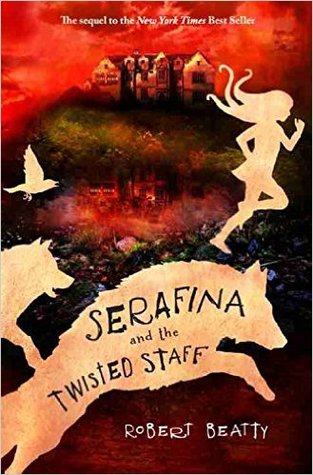 I was a little less than enthusiastic in my review of the first book in this series (Serafina and the Black Cloak) because the heart of the story came out of nowhere and took the reader by surprise very late in the book.  This second volume in the series doesn’t wait for the adventure, but puts the reader right into the middle of some action.

It is 1899 and twelve-year-old Serafina works as a rat catcher on the Biltmore Estate in the Blue Ridge Mountains. Serafina’s mother is shape-shifting mountain lion.  Her father, she believes, is a handy-man at the estate.

Early in the book Serafina spies a dark figure wandering the woods around the estate, and despite her stealth he manages to know she’s there and he sends his hounds out after her.  It is only through the intervention of another shape-shifter that she is able to get away.  But the presence of the dark figure doesn’t bode well for anyone on the estate.  Serafina may be the only person who is able to stop the dark figure and save Biltmore, but only if she had the trust and confidence of someone in the Estate and her friendship with Braeden Vanderbilt is currently not at its best (in large part thanks to the new guest, Rowena).

When Serafina learns that the dark figure has the ability to control all animals in and around the estate, she knows she’s in for a battle that she can’t possibly see winning.  But when she discovers the most likely identity of the dark figure, she knows exactly what he’s after and her focus shifts to protecting the Estate at all costs.

Author Robert Beatty has written a real spell-binding thriller. Although written for a younger reading audience any adult who enjoys fantasy should get caught up in this book as well.

There are moments in which the introduction of a new character or two doesn’t really pan out.  I highly suspect that we are meeting some people merely as introduction so that they might be used in a later book.  The shape-changing boy, for instance, is really interesting, and we get to learn a fair amount about him, and he does make more than one appearance, but despite what he does here, he still feels unnecessary in this particular book.  But I can definitely see him coming back in future volumes.

Beatty’s writing is crisp and easy and he makes everything very real.  Sometimes uncomfortably so. I’m not squeamish or easily moved, but there were times that I was nervous for our characters.

You will want to read the first book to understand these people a little better, but this book is recommended.

Looking for a good book? Serafina and the Twisted Staff by Robert Beatty is a thrilling historical fantasy that will draw you in and have you turning pages rapidly to what comes next.

Serafina and the Twisted Staff