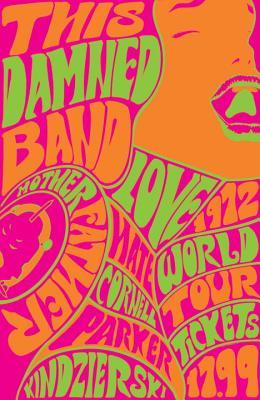 The book takes on the quirks of rock music and publicity in the pop culture market during rock’s hey-day – 1972. In what might be a cross between The Beatles, The Rolling Stones, Led Zeppelin, and Motley Crue (who admittedly came through a decade or so later), and band called MotherFather is out on tour and have a video team following them everywhere to document the iconic band. Is their devil worshiping attitude just a gimmick to sell records, or does the band actually spend time worshiping the devil?  There’s plenty of hedonism, with drugs and sex and greedy publicists lurking about.

There’s a really interesting concept here, but it’s lost in its search for a story.

The question that the story revolves around is: are the band members really devotees of the occult?  It’s a question the documentary hopes to answer as the film crew follows the band around. From a reader’s perspective, the question is: why do we care?  Once presented with the question, we trust that there will be an answer and a reason to care what the answer is. Author Paul Cornell does attempt to give us an answer, but it doesn’t satisfy.

One of the reasons we don’t care too much about what’s happening is because the characters are unlikable.  This isn’t the Beatles, with their snappy patter, or the Stones with their overt sexuality.  These are adult men with no goal in life (not even to create awesome music) other than to get laid and get high.  That may have been enough (and typical) for the early 70’s, but it’s not enough now, even from a historical perspective.

Let’s talk about the art. As usual, being a graphic novel, the art is integral to telling the story.  The art here, by Tony Parker, ranges from strong, realistic images to 1950’s Little Orphan Annie simple.

On the surface, the difference in art styles is distracting.  When I came across the overly cartoony section, I truly thought that a different artist had taken over that section.  But when I went back to see who the artist was, I discovered that all the art is by Parker, which had me re-examine the look of the book.  What I see is that the art changes depending on who has the point of view. Most of the book is from the POV of the film-makers … but not all.  The art changes again when the ‘video footage’ is supposedly from some Super 8 camera film.  And then it changes again – to the very cartoony look – but I can’t tell you why.  I’m confident that Parker has a reason, but I haven’t been able to figure it out.

I do really like some of the angles Parker uses and greatly appreciated some of the long distant/wide looks.  This is something you don’t generally see in comic art.  It definitely helped for the film look.

Parker uses some repeat frames … the same image, repeating with minor changes.  He does this nicely, but when he has inanimate objects change in each panel, I am more and more confused.  It’s cute and clever, but I don’t see a purpose.

There are moments of this book that I really enjoy, but what I come away with overall is … eh.

Looking for a good book?  This Damned Band is a graphic novel of a 1970’s rock band and their fascination with the occult.  There are moments of high interest and sweet art, but the entire package doesn’t satisfy.