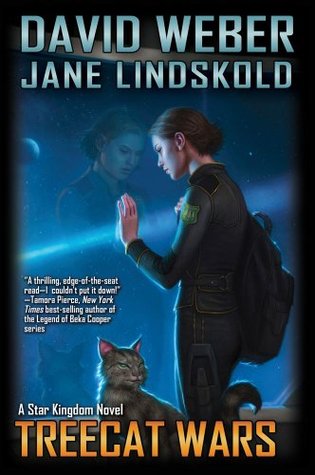 It is a little strange that while I consider myself a ‘cat person’ (I’ve always had at least one, if not two cats living with me as long as I can remember) and I really like YA books, I have never been drawn to books which prominently feature feline characters.  I was drawn to this book by one of the authors whose work I was curious to look at.

This is the third book in a series but I didn’t feel that I missed too much by not having read the previous books.  Weber and Lindskold do a good job of giving the reader the necessary background information.

Stephanie Harrington and her family are recent settlers on Sphinx (we get that cat connection right away!).  Stephanie appears to have a strong psychic(?) bond with one of the native species, treecats, by the name of “Lionheart.”  This development is something that must be described in one of the earlier books.  Stephanie is invited to speak before a council where she urges people to recognize the treecats as an intelligent species.

But something strange is happening.  Treecats are being attacked in unusual numbers and as unlikely as it would seem, it appears the attackers are other treecats.  Stephanie will need to get to the bottom of this and she needs to elicit help to do so.

This is an adventure fantasy for teen girls and as such it has touches of teen angst and plenty of up-and-down woes over relationships.  The story has a good deal of potential for those of us who aren’t teen girls – an indigenous life form facing a new threat with the arrival of outside life – but the plot does not seem to be the priority here.  The priority is Stephanie Harrington and what she does and what she goes through.

I’d like to learn more about the treecats (which is a little unusual for me) and I am very curious about this bond with a teen girl.  Why her?  Why is she unique, or are there others who haven’t mentioned it?  And I’m very interested in a story about ecological damage.  Which means I am curious enough to want to read the earlier books in the series and potentially curious enough to read anything that comes later.  However, the book doesn’t rate too highly because it just doesn’t seem to really grab hold of any of these things directly, but instead tries to do it all which only muddies everything.

Looking for a good book?  Treecat Wars by David Weber and Jane Lindskold is maybe just right for teen girls who love fantasy and cats, but it doesn’t rise above this to appeal to other readers.