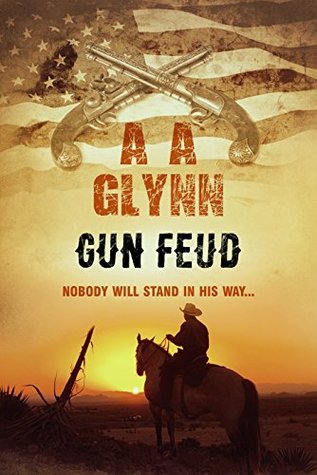 While I enjoy reading westerns I can’t say that I have read a wide range of authors in the genre.  A. A. Glynn is a new name to me and so it was fun to go into this book not knowing what sort of story and characters Glynn would bring.

Gun Feud is a pretty typical, classic western story. There’s a ‘bad’ guy who controls a lot people and a community and a ‘good’ guy, whose brother was killed while he slept by the bad guy. Our protagonist is Will Callender who has a score to settle with Cy Tambaugh. Callender tracks him down but Tambaugh has set himself up nicely in a small community where he has plenty of hired guns working for him.  He also owns the local law enforcement.

Callender first sets himself up in the sheriff’s office (he has a little bit of a background working with the Rangers, we’re told) and then waits for Tambaugh to come after him.  But Will isn’t going to be as easy a target as his sleeping brother was.  In a showdown in town, Callender taunts Cy enough that Tambaugh’s hired guns send him out to shoot it out for himself.

This is a pretty quick read and I would advise the reader not to look too deep for anything.  Everything is presented right on the surface for the reader and just like a classic western, things happen just because they should.  For instance … taunts draw a man out?  A girl we’ve barely met is suddenly in love with the hero?  Well of course – this is escapist fiction and it works as such.

This is a very quick read (one, maybe two days worth of reading time) but it’s full of action and some typical mano-a-mano machismo that you would expect in a story of the old west.

The writing was crisp and easy to follow, but I’m not sure I’d look to Glynn again unless I was looking for something quick like this. I typically like a little more character development and some teeth behind the story

Looking for a good book? A.A. Glynn’s Gun Feud is a fast, action-packed story of the old west that doesn’t stand with much character building but draws on old west stereotypes.