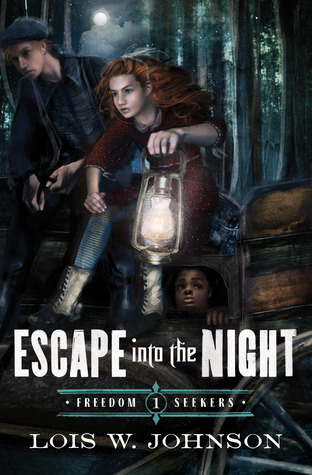 While I did request, and receive an Advance Readers Copy of this reissued book from River North press, I must confess that I did read this book … the whole series, actually … when it was first published in 1995.  I really enjoyed the series (though I liked author Lois Johnson’s Northwoods series a little more) and thought that this might be a great way to get back to it.

Libby Norstad is a precocious young teen in 1857.  After living with a wealthy aunt for a number of years, Libby is finally going to live with her father … aboard a steamboat.  Her father is the captain of a steamboat and travels up and down the rivers.  It’s not the life she’s used to, but Libby wants nothing more than a never-give-up family and in turn, she will not give up and go back to her aunt’s home.

But Libby’s eyes are opened at life in the ‘real’ world.  She learns that there are people cruel enough that they would own another person as a slave.  And the owners would sometimes beat and whip their slaves … right out in the open.  It didn’t seem right to Libby, but the law said that it could be done.  It also said that a master could travel anywhere to search for a runaway slave, even into the territories that didn’t approve of keeping slaves.

Then Libby learns that there are people who help runaway slaves: they hide them and send them further away when the slave-catchers aren’t near, even though it means great danger for them.  And when a slave she saw in the market disappears, Libby wonders if someone she knows might not be helping the slave.  Libby’s always obeyed the law so she should turn them both (slave and helper), but it doesn’t seem right to treat another person that way.  Can she turn to her father for help?

Author Lois Johnson really does a some tremendous research and builds some great characters for her story-telling.  Young readers can get a good feel for the period, steamboats, and the social and political anxiety over slavery in the mid-1800’s.

The book is targeted toward a young readership and it should draw them in and hold their interest.  Libby seems a little extra ‘dense’ sometimes, but this is typically a device used in order to explain something to Libby – and hence to the reader.

The book was originally published by Bethany House – a Christian publisher, and the reprint is published by River North, an imprint of Moody Press – also a Christian book publisher.  Don’t let this deter you if you normally don’t want to read a ‘religious’ book.  Christianity is not a central theme here.  it is part of Libby’s up-bringing and something that she reflects on when trying to do what’s ‘right.’  It is not overt and thinking back, I can’t recall any specific moments when Christianity is mentioned (though I believe it is).

This really is a wonderful book for young readers just starting to learn about American history or events that led to the Civil War, or even about slavery.  It is full of action, and it feels very honest.  It is worth reading.

Looking for a good book?  Escape Into the Night, by Lois W. Johnson, is a historical adventure for young readers who might be ready to read about some of the not-so-pleasant aspects of American history – slavery.

Escape Into the Night