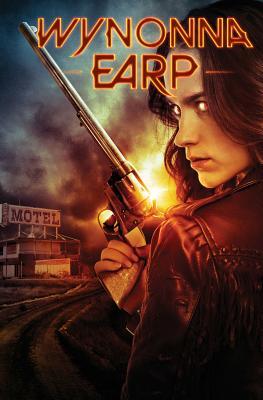 I watched the first few episodes of Wynonna Earp on SyFy and enjoyed it more than I thought I would.  I mean… a modern-day western gun-fighter battling the supernatural?  Really?  A cross between Dresden Files and Gunsmoke?  But it worked, even if the stories I saw were a little simple.

I hadn’t realized, at the time, that the show was based on a comic book series (but of course it was…is there any ‘original’ television?) so when I saw that there was a graphic novel available, I thought I’d give it a try.  Unfortunately, the stories here seem even more simple and the art is generally weak and cartoony.

Wynonna is a great character.  She’s the descendant of Wyatt Earp and is a special agent for a division of the U.S. Marshalls known as The Black Badge division.  Wyatt, it appears, also fought supernatural creatures, and his six-shooter is one of the only weapons that will actually send a demon back down to hell.

So it’s an interesting character with a pretty good set-up, but there’s an obvious lack of world-building here.  These stories are like reading an issue of Archie and Jughead.  Things just happen and the reader has to accept it (or not) because no background is going to be built up.  In each story, Wynonna and her associates face off against some supernatural attack.  End of description.  In one case, it’s zombies in a shopping mall – except the zombies are created by and obedient to a deranged doctor.  In another story, Wynonna goes back in time to Tombstone, Arizona and fights with her ancestor.

The stories here are just dull and the art (mostly) is really awful.  I actually regret reading this because now I’m not sure I want to watch any more of the episodes.  After all, if the series is based on a comic book and the comics are this bad, will the series be any good?

I may watch the show, but I’m not likely to read any more of the comics/graphic novels.

Looking for a good book?  Wynonna Earp, Vol. 1: Homecoming is a graphic novel that just falls flat in every aspect.