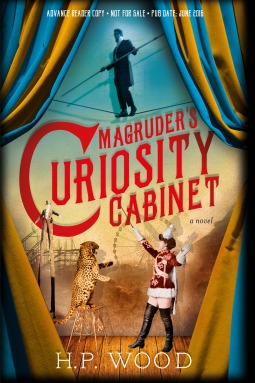 So many people seem to be falling in love with this book, but I can’t help but wonder if it is due in part to a great publicity campaign, of if I’m just really missing out on something.  I was not enthralled with this book.

The biggest problem that I have with this book is that it lacks a true focus.  Titled, Magruder’s Curiosity Cabinet, it is not unreasonable to expect that author H.P. Wood is writing about a ‘thing’ – a cabinet – or at least that it would play a major part in the book.  But the book is about a plague that hit Coney Island around the turn of the 20th century (an imaginary plague … no such plague struck that era).  Or is it about the plague?  Maybe it’s really about ‘The Unusuals’ – a group of misfit people living on Coney Island and looking after one another.  Or maybe it’s about Kitty Hayward and her mother (and dead brother) who arrive on a ship from Africa to have to find their way in the strange new world?  It could be about all of these things (and it is), but suddenly we have a story that is trying to tell too many stories, with too many characters.

I liked the The Unusuals.  I don’t mind admitting that this is what I was expecting … a story about a group of circus oddities.  Look at the title.  Look at the cover art.  I know … don’t judge a book by its cover.  But we are drawn to books for a variety of reasons.  Titles and covers are a part of that, especially when an author is new to the potential reader.

So…while I recognize that a lot of my problem with this book is with my expectations (and that the book was not ‘about’ what I was expecting it to be about), that is over-come-able.  A strong character or story-line can still draw me into a story.  That didn’t happen here.  Because of the plethora of characters, no one stood out as the central character and I was never really behind anyone.  I started out eager to follow Kitty, but she never became a central figure that I cared about.

I just can’t recommend this book.

Looking for a good book?  Magruder’s Curiosity Cabinet, by H. P. Wood, captured my curiosity but never satisfied it.