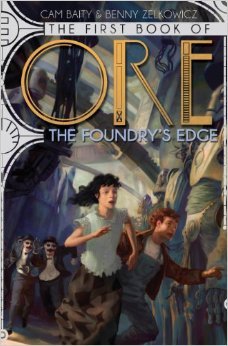 On the surface, this book sounds like it should be a run-away best-seller.  Set slightly in the future, or perhaps in an alternate universe, Phoebe Plumm and Micah Tanner live in Meridian.  Phoebe’s father, Dr. Jules Plumm is the Chief Surveyor for The Foundry – a major corporation that has a monopoly on technology.  But The Foundry has been getting its technology and resources from a strange world – one where metal comes to life – for centuries.  It is the source of everything Phoebe’s world hold’s dear.  But someone has finally had enough, and Phoebe and her father are kidnapped, and Micah, the servant, must come to their rescue.

But what should be an exciting read, with kidnappings and metal-come-to-life, in a futuristic steam-punk sort of atmosphere, gets bogged down in trying to be cool.

The young characters never drew me in to the story which means I had no vested interest in what happened to them.  The setting was unique and quite interesting, and I thought I’d found a really great new concept … and maybe it was … but I just never really cared.   I was turned off by the characters and was wishing I could have some people who would actually be interesting discover the world of living metal so that I could enjoy the book.

One of the problems with the book is that it doesn’t have a very good focus in regards to its target audience.  It’s written, with concepts and language, as a YA, but the characters act like a middle grade level.  At over 400 pages, which do NOT move along easily, this is a challenging book for young readers.  A little trimming and fewer attempts at CTPP (cool things per page) would actually help.

With a great concept (and it is) and Disney-Hyperion being the publisher, you would expect this to be the book everyone is talking about.  But it’s been out for two years now and it is not very well-known.  This is a stronger indication than even Goodreads rating system, that the book fails to capture the excitement that the readers are looking for.

Looking for a good book?  The Foundry’s Edge is a first book in a series by Cam Baity & Benny Zelkowicz that has a great premise but doesn’t deliver on the story.

series: The Books of Ore #1