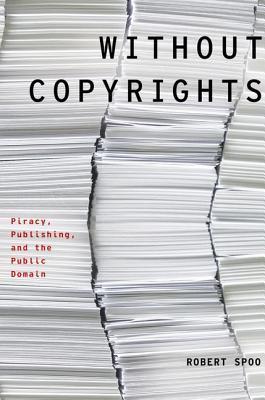 In this age of digital media, with authors and artists and publishing companies expressing concern over the ease of piracy of their work, it is easy to lose sight of the fact that the laws of copyright are ever-changing and that piracy of written works has been going on for a long time.

Author Robert Spoo takes an in-depth look at American copyright laws, the changing definitions of ‘public domain’ and some of the battles, legal and literary, that have led to changes in the laws.  The work is thorough … and a bit dry.

When I first requested this book, I had done so based on the title and subtitle (“Piracy, Publishing, and the Public Domain”).  Nothing about this suggests that this is a history book.  I was expecting something much more current.  A look at copyright in the modern world.  But this is mainly a history book.  The early part of the book takes a look at American copyright generally around the turn of the century and the copyright laws of 1909.

A large section of the book deals very specifically with a magazine publisher by the name of Sam Roth and the legal liberties he took with authors such as James Joyce in the first half of the 20th Century.  Woven tightly with the copyright laws were decency laws (which may have tripped up Roth more than his printing works without permission) which categorized some works of literature (such as James Joyce’s Ulysses) ‘obscene’ and therefore not copyright-able in the U.S. (at the time).

There were portions of the book that I did find eye-opening, or at least food-for-thought.  While I’ve watched some of the copyright laws change over the past few decades, I don’t think I was ever really aware of how disharmonious the laws are among other countries.  As Spoo quotes: “The public domain is always local.”

But perhaps more concerning is the idea that a major reason for world-wide copyright laws being so fragmented is due in large part because of “America’s copyright isolationism.”

Looking for a good book?  If you are interested in the history of the U.S. copyright laws, Robert Spoo’s Without Copyrights is a serious look at the concerns from some authors’ perspectives, as well as an in-depth report on one particular publisher who pushed the laws to the limit.

Without Copyrights: Piracy, Publishing, and the Public Domain