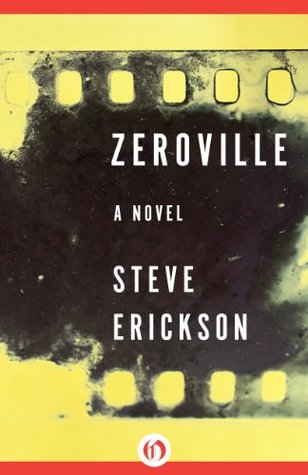 Zeroville is a bizarre look at the film industry at a time when bizarre was often key.  The film world of the 1960’s, when this begins, certainly had its mainstream, popular movies, but its counter-culture film world was rife with oddities.

In comes Vikar (with a “K”) Jerome, a young man so fascinated with film that he’s had an image of Elizabeth Taylor and Montgomery Clift tattooed on his head.  He moves in to Los Angeles and wanders Hollywood Boulevard, just trying to breathe in some of the film world, without any job or goal at hand.  He is aimless, other than a desire to be a part of the world were film magic happens.  Vikar is socially inept.  Extremely.  But as is often the case, because he’s so socially unaware, he will often walk the path that most people would avoid.  He interacts with people in all walks of life and his journey makes this a story about hippies, murder, obsession, surfing, Joan of Arc, god, and of course film-making.

Vikar manages to get work in the industry, mostly through connections made because he’s a fan of some of the more obscure works and artists/craftsmen in those obscure works.  As a film editor, Vikar (untrained, of course) takes his unique slant toa film, which has people talking about how strange — but brilliant — it is.  He even manages to win a major award for his work.

One of the strange things (notice … “one” of the strange things) about this book is that I am never drawn to Vikar.  I don’t particularly like him, but at the same time, I don’t dislike him.  I’m never rooting for him, hoping for his success, but I caught myself watching over him, wondering what he was going to do next and how he would manage it.

But the form of the novel… ah… that’s where this is even more unusual than Vikar himself.

The book is written in extremely short chapter.  Most under a page in length.  Some chapters are only a word long.  One chapter is blank.  And the chapters start at “Chapter 1” and progress in number to 227.  … and then count back down to “Chapter 0.”

This style of chapter formatting most clearly doesn’t seem random, but I’m not sure I’m clever enough to understand it.  The shortness of the chapters reminds me of a frame of film, and of course it takes a lot of frames to make a movie (or a book, in this case).  And one frame doesn’t fit the book, just as Vikar discovers a film that’s been hidden inside other movies (you really have to read this to understand).  And for all of this, I think the crafting is brilliant.  Now if someone could explain to me the ascending and descending numbers for the chapters, I’d appreciate it.

This book is not light-weight reading, but if you enjoy literary fiction with a dark satire bite and an absurd bent, then this is something you really should read.

Looking for a good book?  Zeroville, by Steve Erickson is a darkly funny tale of Hollywood and is recommended for those who don’t mind being challenged to read something with a bite.