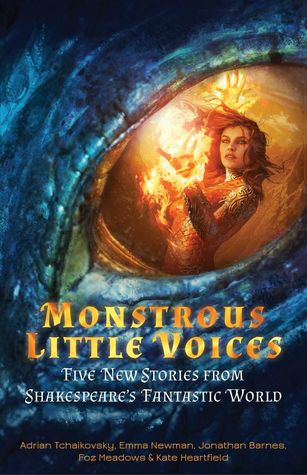 Although I wasn’t particularly crazy about reading Shakespeare when I was in college (and still not a fan of it), I actually enjoy seeing Shakespeare done well by professional theatre companies.  (Full disclosure, for the past eleven years, I’ve worked for a Shakespeare theatre festival.)  What we have here, in Monstrous Little Voices, are five short stories using characters from Shakespeare to tell new or continuing stories.  It is not a particularly new idea … I’ve enjoyed the comic book series Kill Shakespeare, which also plays on this theme … but I’m not sure I’ve seen it packaged in a book this way before.  And it works.

These stories are really delightful, and for those of us familiar with the characters already, they are worked nicely.  For those not familiar with Shakespeare’s characters, this can still be enjoyed as a collection of five wonderful fantasy tales.

Some of the stories (not all) are broken down into five acts, or chapters, simulating Shakespeare’s five-act plays.  I appreciated this.  (Though it was a little cruel to have the last story NOT be in five segments, since I was expecting it!)

Foz Meadows’ “Coral Bones” is likely to be a popular favorite in this collection.  The story follows Miranda, from The Tempest, and shows that he fairy-tale ending isn’t quite what we hope for.

“The Course of True Love” by Kate Heartfield shows us lovers who aren’t the typical teens or early twenty-somethings, which is a nice twist.

“The Unkindest Cut” by Emma Newman is a really powerful piece with a lot of depth.  I think I liked this one the most just for how much we’re given about these characters.  This is one I’d really like to see expanded to a full novel.

Adrian Tchaikovsky’s “Even in the Canon’s Mouth” was probably my least favorite of the bunch.  This was just the opposite of Newman’s story in that the characters had very little depth to me.  I could only picture the characters as I’ve seen them portrayed on the stage (which I don’t think is a good thing for a book like this) and it just didn’t work.

And finally, “On the Twelfth Night” by Jonathan Barnes.  I’m really mixed on this story.  There were aspects that I really liked (bringing in Anne Hathaway), and things that didn’t work as well (sort of tying the other stories together).

One thing that I find is that the use of characters from A Midsummer Night’s Dream is just too over-done.  It’s so easy to play the fantasy of a spirit like Puck and fairies like Peaseblossom and Mustardseed that it gets done a lot (and perhaps my own dislike of the play – again, because it’s so often done – is part of my dislike, I admit).  I really would have preferred not seeing any of the Midsummer characters in this collection (take that as a challenge writers!).

Overall, I think fans of Shakespeare and fans of solid fantasy writing will really enjoy this collection.

Looking for a good book? Monstrous Little Voices is a collection of stories using characters and themes from Shakespeare’s works and is a really nice collection that ought to be enjoyed by any fantasy reader.