ART OPS: HOW TO START A RIOT – graphic novel 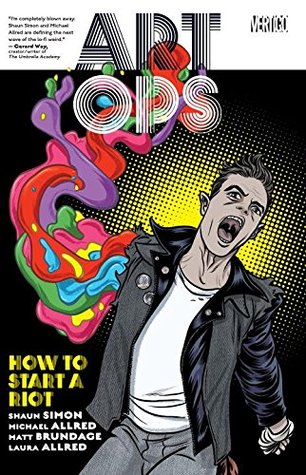 What did I just read?

Let me start with the first two paragraphs from the Goodreads description:

Reggie Riot is no one’s idea of a cultural savior. The latchkey child of a busy single mother, he’s grown up to be a resentful slacker whose idea of high culture is getting stoned and admiring the graffiti in the alley where he scores his weed.

His mother, however, is not your average working parent. She’s the head of a secret organization called Art Ops, whose mission is protecting the artistic treasures of the world—which have a lot more life in them than a casual observer might realize.

This all seems relatively straightforward, but now toss the idea in a blender, along with the 1960’s black velvet paintings, psychedelic drugs, and some 1950’s angst, push the puree button and you start to get something that resembles this book.

To protect the works of art, the art becomes (or already is – I’m not quite sure) real.  Real people.  Real places.  The Art Ops takes those people out of the paintings, disguises them, and has them living secret lives.  It’s sort of like the witness protection program, but for the living embodiment of art.

Reggie Riot maybe has some artistic superpowers.  His arm isn’t a real arm … it’s a swirl of paint (or color, at least) that can really pack a punch, as he proves in a boxing match. (Um…yeah … a boxing match.)

Now, there’s this ugly piece of art that’s jealous and trying to destroy the pretty art.  And this is where the wacky, but full of potential idea falls.  “Ugly” wants to destroy “pretty?”  Really?  That’s it?

The story rambles but because, at its core, it was about art (something that will almost always catch my interest), I stayed for the ride, hoping that the jumble would pull together or at least make some sort of sense.  Yes, it sort of does, but it never quite rises above the pedantic level to really take on the questions of what is art and how do we save it.

The art itself is fair at best, which is really too bad, since it’s about art.  It’s pretty typical comic book art ala the 1970’s.

I was intrigued by the concept but this didn’t carry through with a coherent story.

Looking for a good book? Art Ops: How to Start a Riot is a graphic novel that has an interesting concept about ‘saving’ art, but simply rambles in a psychedelic manner.

Art Ops: How To Start A Riot