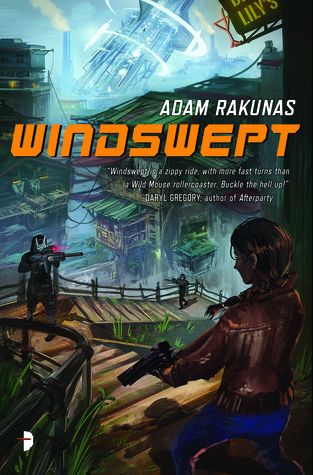 Windswept is an action/adventure sci-fi novel in which the simplest of desires becomes a complicated series of events and an average ‘Joe’ (or ‘Josephine’) must become an action hero in order to see out that simple desire.

Padma Mehta has a dream to make a successful career as a business woman, owning a major rum distillery on a beautiful planet at the far end of the galaxy.  Three corporations control most of the business and trade on the planet, and most people are indentured laborers to the corporations.  Padma is one of the few “Breachers” – someone who escaped the clutches of indentured work for the corporations by joining a labor union.

But Padma needs a little help to get her business (and her dreams) off the ground.  To earn some necessary cash, she agrees to bring in more “Breaches” to the union for a cash bonus.  She’s only about 30 new Breaches short when she discovers corruption in the ranks and  what she thought would be a relatively quick means to earn some cash becomes a battle for survival and thrusts the unassuming Padma into a leadership role that she wasn’t looking for.

Author Adam Rakunas has done a really fine job of world-building, and he has made an interesting story out of something very quotidian; labor, unions, booze.  Rakunas understands that humanity hasn’t changed a great deal over the centuries and isn’t likely to change much in the future.  Somehow, a sci-fi/adventure story about unions and rum-making doesn’t immediately sound very exciting, but Rakunas handles the story-telling well.  The book is infused with a fair amount of humor, primarily from Padma who gets roadblocked every time she starts to make progress in a venture.  She even says, at one point: “I feel like the whole world just farted on me.”

And while there’s a lot to like here, the book really doesn’t draw the reader in and doesn’t propel page-turning desire.  The roadblocks I just mentioned get a little old and Padma as unlikely hero never steps it up to become someone we really want to see succeed.

This is truly one of those middle-of-the-road books.  Enjoyable at times, a little drawn out at times.  It’s the sort of book you might bring to the beach for a read because you’ll enjoy it while you read it, but if you forget it at the beach house, you won’t be too upset.

Looking for a good book?  Windswept, by Adam Rakunas is a slightly humorous sci-fi story of labor and unions and the desire to own a rum factory on a far away world and it has its delightful moments though it won’t be forever memorable once it’s been read.