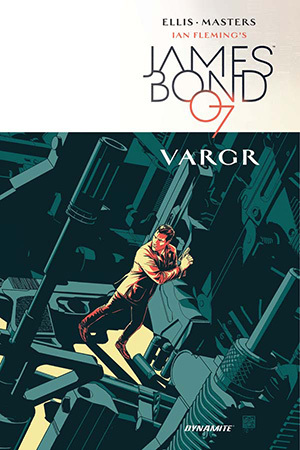 We start the book with Bond finishing up a revenge mission, definitely setting up the tone that this is not the James Bond we’ve become accustomed to.  On his return to the British Secret Services offices only to be sent right back into the field to finish off a project that another ’00’ had been working on before being killed.

The book is full of action, with pages and pages of sequences with not a single word of dialog or thought balloon.  Yes, the story is simple enough to follow (Bond hides.  Bond sees someone.  Bond aims.  Bond kills someone.)

The films are action-adventure films full of high-tech gadgetry .  The books move much more slowly by comparison, with Bond a little less suave and a little more willing to take advantage of his ‘license to kill.’  This comic, written by Warren Ellis, is much more in line with the original Ian Fleming books.

But just as the books aren’t nearly as compelling as the films, neither is this graphic novel.  The story is so simple and straight-forward that it really fails to draw the reader in.  The revenge killing at the start had me thinking that this was going to be a very different story – one about Bond going rogue and killing people for spite.  But no – this is just telling us not to expect the Bond we think we know.

The art is decent enough.  Bond has a Joe Everyman look (which is probably better for a spy), and character appearances stay consistent.  The art also propels the story forward in most cases – which is necessary since there is so little dialog.

Nothing about this book was ‘bad’ – but nothing about it made it stand out (other than that is bore the James Bond 007 name).  But it didn’t need that.   This could have been any spy story, and might actually have done better if it wasn’t trying to be faithful to the original print series.

Looking for a good book?  If you’re a real James Bond fan, you should love this graphic novel, James Bond, Vol. 1: VARGR.  But if you are new to the Bond franchise or just looking for outstanding graphic novels, this is probably not a book you’ll want to pick up.