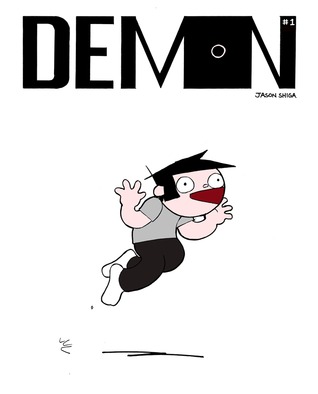 What a strange, yet satisfying, graphic novel this is!

I’m going to talk about the artwork first.  It took me a page, maybe two, to get into the art.  As you can see by the picture above, this is not uber-realistic character drawing.  This is much more in line with work by artists like R. Crumb or early Matt Groening or even Tom Wilson.  It is very ‘cartoony.’

But this is not for children.

So why this kind of artwork and why does it work?  It works because what is happening is gruesome.  It is violent and bloody, but it’s part of the story and if the art were realistic, we’d be caught up in the gore rather than in the story.  The ‘simpleness’ of the art also opens up the panels and pages making our character look very alone.

Jimmy kills himself … and then wakes up.  And so, he tries again and kills himself.  And then wakes up.  Jimmy goes through this a few times until he realizes that he simply can’t kill himself.  Only later does he realize that he HAS been killing the body he’s been in, but his … spirit…his essence … then inhabits the body nearest to him.  Later still he realizes that while he doesn’t appear to change, to himself, others see him as whomever it is he is inhabiting.

It is very nice that the reader gets to discover this at the same pace as the main character.  And so it comes as a bit of a surprise to the reader, as well as to Jimmy, that there is a government agent who seems to know what is going on – likely knows more than Jimmy.

I had no idea what to expect as I went in to this book and I can’t say that I would have necessarily picked it up if I had seen it on a shelf (based, I’ll admit, on the appearance) but I really got caught up in this story as I was reading through it.  We learn what instigates his desire to commit suicide, but what the government stooge knows is a mystery that definitely has me wanting to read more.

Looking for a good book?  Demon, Vol. 1, by Jason Shiga, is a very unique, highly interesting graphic novel for adults.