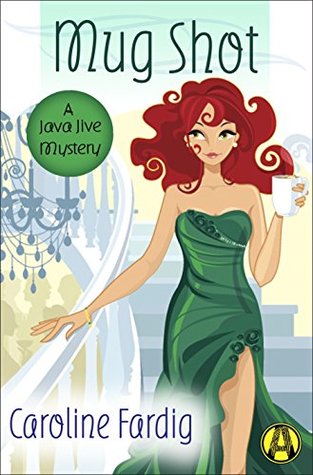 Mug Shot is the second book in Caroline Fardig’s Java Jive series and continues both the investigative powers of Juliet Langley and her rocky romances.

Juliet manages a small coffeehouse, Java Jive, owned by her friend Pete Bennett.  Juliet, and the store, are just starting to recover from an incident in which Juliet discovered murdered bodies on  the premises (see previous book).  To help things pick up a little bit, Java Jive is helping at a local 5k race and will have a booth set up near the finish line.  But Pete’s girlfriend, Cecilia – a snobby socialite – is constantly finding fault with everything Juliet is doing.

But as Juliet is getting frustrated with Cecilia she stumbles over Celia’s dead body.  If she hadn’t been with her ex-boyfriend, Detective Ryder, she’d likely be a suspect again, but almost as bad – Pete becomes the prime suspect and is sent to jail with a bail so high she can’t get him out.

Juliet’s known Pete a long time and she’s confident he couldn’t have done anything like this.  And when she can’t get the police to listen to reason, she knows she has to investigate.  But her hot temper could land her behind bars as well.

Only two books in to the series, but Fardig has done a great job of writing a light, but very compelling mystery series.  Juliet Langley is a great character, sure to appeal to male and female readers (for different reasons – and the great cover art sure doesn’t hurt).  She’s strong, independent, vulnerable, and emotional.  The book is almost equal parts mystery and romance.  And despite the murders (meaning that this is not a ‘cozy’ mystery), it maintains a generally light atmosphere making it an easy read (‘easy’ in a good sense).

Publisher Alibi has done a great job of finding some clever, unique, and light mysteries.  This is going to become one of my preferred series’ (along with Alibi’s “Jake and Laura Mystery” series).  I highly recommend it.

Looking for a good book?  Caroline Fardig’s Mug Shot is a light, entertaining mystery (almost a romance) with a fantastic central character.  If you want a mystery book to take to the beach – this should be the one.