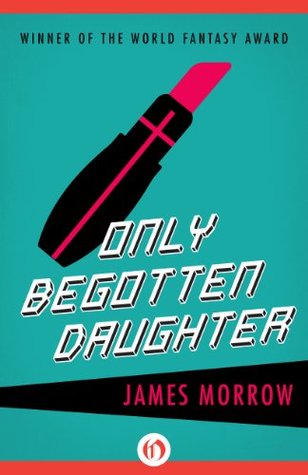 I’ve only read one other James Morrow book (Towing Jehovah) and I’m not sure why that is.  Morrow is a fantastic writer and, based on the now two books that I’ve read, he is incredibly original, funny, and dark.

This book takes on Christianity, skewers it, and flips it on its side.

In this story, Murray Katz, the keeper of an abandoned lighthouse (our first hint of the symbolism that is rife in the book) near Atlantic City, sells his sperm regularly for extra income.  But something is wrong with his latest batch.  It seems that there is an ovum in with his sperm, which is now fertilized and beginning to grow. The Jewish Katz is about to give birth to a divine child.  A child begotten of God.  And so begins our story of Julie Katz, the Only Begotten Daughter, half-sister to Jesus on God’s side.  Able to perform miracles but resisting it because of the fear of persecution, Julie both appreciates her divinity and doesn’t understand her purpose.

The humor here can be dark and then outrageously funny (though perhaps those who are strongly Christian Right Wing party members won’t find any humor here). And Morrow isn’t making and attempts to hide the Christian story parallels here.  In fact, the more you know, the more you’ll pick up on in this book.

The characters are richly drawn and the plot relatively straightforward.  Morrow’s writing and command of language is a thing of beauty:

…he began transforming his immediate environment, making it characteristic of heaven. The whole glorious span of Dewey’s decimal system soon filled the lighthouse, book after book spiraling up the tower walls like threads of DNA, delivering intellectual matter to Murray’s mammalian cortex and wondrous smells to the reptilian regions below—the gluey tang of a library discard, the crisp plebeian aroma of a yard-sale paperback, the pungent mustiness of a thrift-store encyclopedia.

For all of this, the book gets a high rating.

But one thing keeps it from getting a full five stars from me….  Just as I felt when I read Towing Jehovah, I couldn’t help shake the feeling, about two-thirds of the way through, that Morrow himself was growing bored with the characters and the story but couldn’t find the right way to get them back on track and to the end.  The characters and the story are set up.  The story begins.  But then the story gets lost on the way.  The story ends.

If it’s a case of me growing bored (and not Morrow) that’s nearly as bad.  It means the story didn’t hold my attention for a bit.

But I like this enough that I want to re-read it.  Perhaps see where it was that I lost interest.  Perhaps you should read it and let me know what you think.

Looking for a good book?  Only Begotten Daughter by James Morrow is a skewering, satire on Christianity that shares a lot of (uncomfortable) truths about faith.