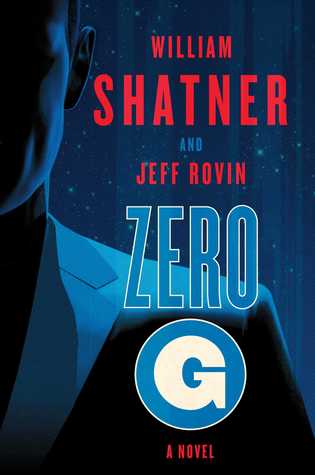 I went in to this book somewhat hesitantly – I have not been a big fan of ‘Shatner’s’ TekWar series,  But since this book actually lists a co-author, and it’s not the rumored co-author of TekWar, I decided to give it a try.

Thirty-plus years in the future, the FBI sends field agent Samuel Lord to the space station “Empyrean” to take command of the “Zero G-Men” team investigating terrorism, corruption, and espionage outside of Earth’s atmosphere.  There is a Chinese station and Russian station in orbit that need constant monitoring.

But shortly after the Zero G-Men team get situated on the Empyrean, a woman by the name of Dr. May arrives, claiming that some very important research has been stolen from her office on the moon.  Coincidentally, with Dr. May’s arrival on the station, there is a tsunami on Earth that destroys coastal Japan.  Then the Chinese space station goes strangely quiet.  Are all the events connected?  Lord and his team have their hands full as they try to sort out the different events.

The book starts out really, really well.  The introduction of Lord and his team is great, and the setting, although a bit on the sci-fi stereotype side, are nicely described and made to feel quite real.  Lord is not your typical sci-fi/detective hero, but it’s pretty easy to see that he’s created for someone like … oh … say, William Shatner to play in any possible movie or TV interpretation of the book.

But then we get in to the story.

Some great characters and a nice concept, with plenty going on, but the book doesn’t hold my interest all the way through.  The tsunami that destroyed Japan was the beginning of the downfall for me, and the secret of Dr. May goes on much too long.  I liked Lord as a character, and I liked the team that supports him, particularly Adsila Waters who connects, spiritually, with her Cherokee heritage.  As long as the as future books in the Zero-G series (I have to expect that there will be future books – this is sometimes subtitled “Book 1”) don’t start stereotyping the ‘Native American,’ there is some real potential for character growth and exploration here.

We have some good characters and world-building from which to create a series of books.  If the plots can get a little tighter and keep us interested, this will be a very good series.

Looking for a good book?  Fans of William Shatner’s TekWar series should love Zero-G by Shatner and Jeff Rovin as it feels like a grown-up version of the TekWar books.  It shows a lot of promise by the story itself could be tighter.