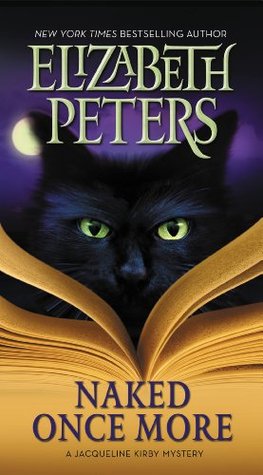 When I requested this book (two, almost three yeas ago!) I hadn’t read many mysteries but this was among those that was going to start me down that path.  I lost the book when the Kindle it was on gave up its digital ghost and only recently figured out how to find most (but not all) of my lost books.  I’ve since read a number of mysteries and have gotten much more familiar with the genre, which I think is probably a good thing.

This mystery follows Jacqueline Kirby, a best-selling romance author who is invited, along with a number of other romance authors to being considered to write the sequel to “Naked on the Ice” – a massive best-seller – when the author of this is declared legally dead (her body was never recovered after the discovery of an auto accident near a river).  Jacqueline is selected for the opportunity to write the sequel and chooses to move to the original author’s home town to better get in touch with the author’s feelings and intentions, and to be able to review any possible notes the author may have left behind.

But Jacqueline soon receives threatening letters and an attempt on her life.  But when the local bookstore owner is found dead in a homicide made to look like an accident, Jacqueline knows that there is something deeper going on and spends more time researching the murders than she does on the book.  Her discovery shocks everyone and Jacqueline makes the big reveal in a classic drawing-room scene.

Since reading the book I discovered that this is the fourth in a Jacqueline Kirby series and it’s really nice to note that not once, while reading this, did I feel that I was missing out or that I really should have read the first three books to really understand this.  I’ve long felt that you shouldn’t HAVE to read books 1-3 to enjoy book 4.  And author Peters shows that this can be the case.

I was captured by the story very early on with the introduction of the characters (living and dead) and the challenge of writing a sequel to a best-seller by a different author.  And I was quite rooted in the story as we approached the climax and denouement, eager to see who was the culprit was.

But I was bored and listless through the middle portion of the book.  There was too much story that didn’t move the action forward or reveal any great clues and it wasn’t until the murder of the local book store owner that the story got interesting again.

This was one of those “yeah…okay” books.  Nothing horrible here, but nothing that makes me eager to read another Elizabeth Peters book.  I’ll also note that it really drives me crazy to read improper English usage in a published novel.  This is a reprint so I must assume this improper language is a hold-over from the earliest publication.  Peters writes: “He shouldn’t of run off that way.”

Looking for a good book? If you like mysteries and you want to see a romance author in the middle of a mystery, Naked Once More, by Elizabeth Peters is a fine choice for a weekend read.