IN THE KINGDOM OF ICE – Hampton Sides 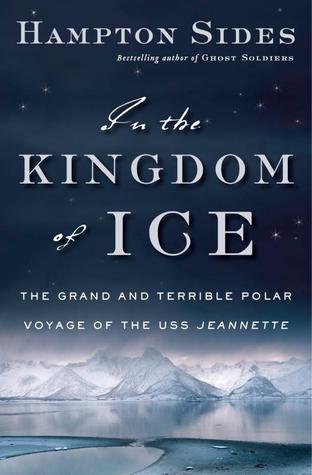 I recently worked on a documentary film in which some people were attempting to sail the Northwest Passage.  Because of this, I developed an interest in learning more about some of the expeditions to the Arctic.  When I saw this book available on Audible, I was quite eager to give it a listen.  It does not disappoint.

In the late 1800’s, the Arctic was one of the few, vast, unexplored regions on the planet and many people were fascinated by what might be there.  One common belief was that there were warm currents that actually kept a land mass lush with plant life.

After his success sending Stanley to Africa to find Dr. Livingstone, James Gordon Bennett, the wealthy owner of the New York Herald, decided to so something similar with the Arctic and funded an official U.S. Navy expedition to head to the Pole.

Captained by George Washington De Long, a young officer, the voyage would have 32 men who would be sailing uncharted territory in a ship re-christened the USS Jeannette, on the way to be the first to plant a flag at the North Pole.  Not long after embarking, the Jeannette is stuck in ice, and after two years on the dangerous journey, the ship’s hull is breached by ice and the crew continue the journey on foot and sleds.  All along, Captain De Long maintains a detailed journal that despite its cumbersome nature he carries with him.

I found the research here to be incredibly thorough and, unlike many non-fiction books of late that write about the thoughts and concerns of the major characters based primarily on presumption, author Hampton Sides does a good job of detailing facts and draws from personal journals and letters to give us a glimpse of what the people involved were going through.  At the same time, Hampton builds a sense of mystery and tells the story as though it were a thriller.

Not knowing this story prior to this (other than that I know the North Pole was ‘found’ in 1908 or 1909 [depending on who you believe found it first]), I was completely captivated by this story and by the characters involved.  Hampton really draws us in to the story and helps us get to know many of the crew members as individuals, which means we’re much more invested in their story and we hope for their survival.

I don’t want to give too much away because this is a book worth reading, but suffice it to say that they do not make it to the North Pole and not everyone will survive this journey.  But where they do travel to, and who does live is well worth discovering.

I listened to the Audible version, and narrator Arthur Morey is the perfect reader for this book.  He was easy to listen to and helped to keep me interested.

Looking for a good book?  In the Kingdom of Ice, by Hampton Sides, is a gripping account of an early expedition to the North Pole and well worth reading.

In the Kingdom of Ice: The Grand and Terrible Polar Voyage of the USS Jeannette