THE STORY OF PUCK: WHAT FOOLS THESE MORTALS BE – Michael Alexander Kahn and Richard Samuel West 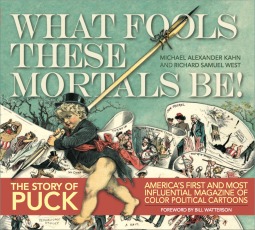 The more things change, the more they stay the same.

As I write this, the news has been full of reports on the Democratic and Republican stumping for the party nod in ten months and it has been an absolute zoo of presidential wannabees.  Political satire today has a broader range  as we have not only newspapers and magazines but also radio, television, and internet pundits.  But in today’s political arena the politicians seem like they are satirizing themselves with their extreme positions and antics.   How much we’ve changed.

Puck was a humor magazine published in the U.S. from the late 1800’s to just after the turn of the century.  Political humor was perhaps its most popular bedfellow.  And one thing we can see by looking at some of the political cartoons from the time is that politicians, and the average person’s impression of politicians, haven’t changed much in 150 years.

This book is well researched and also incredibly well presented.  The book is broken down into sections (History of Puck magazine, The Puck Building, Presidential Politics, Politics and Government, Business and Labor, Foreign Relations, Race and Religion, Social Issues, Personalities, Just for Fun, Biographical Dictionary, Bibliographical Note, Index) and lavishly illustrated with reproductions of the artwork from the magazine to exemplify each section.

The artwork is impressive.  The detail these artists provided is so fine, and the ability to reproduce this art is something I wasn’t prepared for.  The humor here is strong and one can see shades of a precursor to magazines such as Mad or Cracked, though the intended audience has changed.  The equivalent today might be the French Charlie Hebdo or the British Punch magazines.

With each reprinted cartoon, the editors have included a synopsis of what the cartoon is targeting, the artist, and the issue date that the cartoon was published.  Because the work here was timely and often at the forefront of social thought (whether it followed, or led social concerns is debatable) this book is more than just a beautiful coffee-table-style book (which it could be).  It is also a tremendous history book.  But here we aren’t looking at history as reported on by historians, but history as reported on by commentators (think: Stephen Colbert or Jon Stewart).

This really is a great book and anyone interested in art, history, politics, or humor should appreciate it.

Looking for a good book?  The Story of Puck: What Fools These Mortals Be! is a remarkable history book of political (and other social) cartoons from a popular turn of the (20th) century magazine, Puck.

I received a digital copy of this book from the publisher, through Netgalley, in exchange for and honest review.

The Story of Puck: What Fools These Mortals Be!