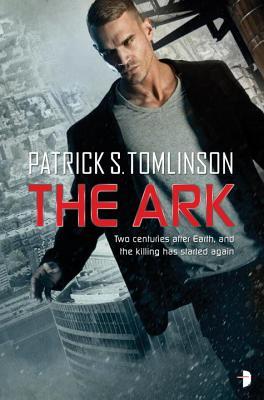 The last remnants of Earth and humanity are in a giant moon-sized ship hurdling toward Tau Ceti G where they will re-settle humanity.  The trip has already lasted hundreds of years and those aboard are second generation (at best) of those who first set out for the new world.  Everyone aboard the ship has an implant so that they can be monitored (they are born that way) and everyone has a specific job to do.  Bryan Benson is a retired athlete – a famous figure, a hero – currently living in the module Avalon and working as a detective.  It’s mostly pedantic work until a crew member goes missing and is later found dead.  And Benson is sure that it is no coincidence that this has happened to a crew member at just about the same time that the Ark (how they refer to their ship) is about to go through a difficult maneuver as they prepare to orbit their destination (after 200 years!). Though used to the limelight, Benson finds himself getting some very unwanted attention as he explores areas of his ship/world that he couldn’t have imagined existed.  Benson’s investigation has him making enemies in high and low places and it just might be up to him alone to save what’s left of humanity.

A few years ago I might have said that I would have no interest in reading ‘space opera’ science fiction, but that has changed (in large part due to ‘The Expanse’ series by James S.A. Corey).  The Ark is classic space opera (I use the definition of space opera as “adventure stories in space”) with some good old-fashioned detective mystery thrown in and it is good, solid fun.

Author Patrick S. Tomlinson has written a face-paced sci-fi mystery with a hero who is rough, tough, morally straight, and extremely likable with a crew of interesting supporting characters.  It is Bryan Benson who carries this novel and keeps us interested.

The mystery aspect of this book is very well-developed and we’re led on a few wild goose chases, just as you would hope in a mystery like this.

There are some interesting diversions within the book, specifically a fairly lengthy excursion into historical acquisitions and the antiques (particularly of an art nature) that were selected to go on this journey.  Though Tomlinson does a nice job of tying this in to the story and making some of it integral to the story, it still feels just a little out-of-place.  In part this is because it feels we’re being spoon-fed some information.

This is a little bit of a problem later on as well.  As we get in to the later portions of the book we told things (“She didn’t gasp or cry, but it was obvious the sight shook her to the core. Shame welled up in Benson’s gut.”) rather than shown them.  I didn’t get this feeling earlier.

And while I did appreciate Tomlinson’s world-building here (though I have to admit I couldn’t quite picture this ark) there didn’t appear to be much advancement in technology.  Certainly this is a mixed bag … it takes place hundreds of years in the future, but advancements on a static world/ship are limited to the materials on hand.  Even so, surely some things would be lost over the course of the generations and some new things learned or discovered.  It struck me as very odd that a very large room is described in this way:

But look at this place, it’s like a, a hotel suite.  It doesn’t look like anyone’s lived here.  It’s too perfect.

They are on a giant ship.  An ark.  And it’s been 200 years on this ark.  Generations born and died.  So how does anyone know what a hotel suite is?

But despite these nit-picky concerns, I really enjoyed this book.  I was entertained; I was interested and involved.  And I really look forward to following these people as their journey continues.

Looking for a good book?  Patrick S. Tomlinson’s The Ark is an exciting science fiction mystery that will draw you in and keep you on the edge of your seat until the very last page.

series: Children of a Dead Earth #1