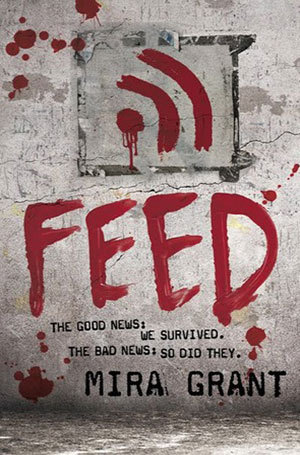 I read the second book in Mira Grant’s “Newsflesh” series a few years ago when it was in the voter’s packets for the Hugo award.  I had liked it enough that I wanted to experience the whole series.  I selected the series through my Audible subscription and made this my commute listening material.  I really enjoyed it!

While the series features zombies as the horrific obstacles, like most stories worth reading, this is a story about people overcoming those obstacles.

In Feed, the humans we follow are brother and sister team Georgia and Shaun Mason who are popular bloggers in a world that is trying to survive the zombie apocalypse.  The zombie outbreak occurred 20 years prior … a virus (Kellis-Amberlee) that takes over the victim’s body and gives it one direction: feed.

This isn’t the plot … this is the setting, the world that Mira Grant has created.

The Masons are bloggers, or at least what we would call bloggers today, but in this world they are journalists and they are able to get real-time stats on their reports and follow how many times a story is shared.  In this way, the story is quite believable.  As is the fact that despite the immediacy of the format and the far reach that bloggers have, blogging is still not always considered ‘legitimate.’

And so, when U.S. Presidential candidate Senator Ryman invites the Masons to be on the campaign trail, it is unusual (showing Ryman’s progressive attitudes) and it is a chance for the Masons to get a serious position in the blogging field.  What could go wrong?

Did I mention that there are zombies?

What if someone were to use the Kellis-Amberlee virus to put an end to Senator Ryman’s campaign?  Or to go after those following the campaign?  And would anyone possibly believe a pair of young bloggers if they uncovered such evidence?

This book is an absolute marvel in story-telling.  The world-building is believable (even if it does contain zombies) and the characters are fresh and real and it is easy to get attached to all of them. The plot, as a political thriller in the future, is full of action and excitement with more than just a little death and destruction.

The Audible edition is narrated by two readers: Paula Christensen and Jesse Bernstein.  They both do a really great job of creating characters and letting the listener really feel the story (sadly, this is not always the case with Audible books).

Not being a big zombie person myself (though I have watched the first two seasons of The Walking Dead) I was surprised at how much I enjoyed this, but I think it’s because it’s not about zombies, but instead is a political/medical thriller involving progressive journalist/bloggers.

Looking for a good book?  Feed, by Mira Grant, is an exciting thriller set in a future with zombies.  The Audible edition will really pull you in!