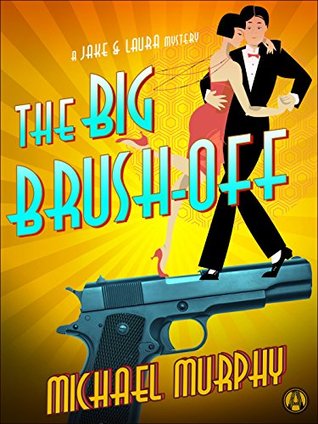 Over the course of the last two years I’ve read and reviewed over 200 books.  I would say that most of them have been better than average and I’ve read some that have really interested me in some new authors and/or series’.  But one of my absolute favorites is the ‘Jake & Laura Mystery’ series by Michael Murphy.  I will drop everything to read a Jake & Laura story.

But every series has its ups and downs.  The mark of a true fan is one who sticks with a series through the bumps and still finds the positive points in the book.  That’s how I see this book.

Jake Donovan’s “Blackie Doyle” book series sales are slipping.  Jake’s editor dismisses the latest manuscript and tells him he needs to start over but he really needs to focus and get back to what made Blackie Doyle so popular in the first place.  So Jake and his famous-actress-wife Laura get on a train and head for a small Pennsylvania town where Jake once worked as a Pinkerton man.  The town still has a murder case that’s gone unsolved for a decade.  A murder case that Jake once worked on.  And on the anniversary of  the murder of the teen-aged girl, there are some who hope Jake can finally solve the crime, but too many who seem to be doing everything they can to stop the investigation.  But what Jake really wants to do is write his next best-seller.

This fourth book in the Jake & Laura Mystery series takes on much more of a classic ‘who-dunnit’ mystery, which is just a little bit of a departure for the series.  Heading to a small town to solve a ten-year old murder … no famous actors or musicians or politicians or socialites … with some folks who almost come out of Mayberry is a departure, not just for the reader, but for Jake and Laura, too.

This reads like a cozy mystery.  Although there is a murder, it happened ten years ago, and the leading suspects back then are still around and Jake still hasn’t ruled them out – even though one of them, a reverend, is the one asking Jake to solve the case.  Nothing too terrible happens here … some threats, some bullying, but the biggest danger is whether or not Jake’s new manuscript will become a bestseller.

While I can’t really help but compare it to the other books in the series, even if we look at it as a stand-alone novel, there are a few small issues I have with this volume.  First, it was pretty clear to me who the culprit was going to be.  I am not the most educated mystery reader (I’ve often been surprised by mystery resolutions where others report on how evident it was early on).  But mostly, I was a little tired of reading, over and over, Jake telling people he was not there to solve the mystery, but to write his book.  It felt as though every character he met he had to tell them the same thing.  It is one of the memories I take away with me after reading the book, which is not the way we want to leave a book.

The irony is not lost on me that a book about a writer who needs to ‘return to his roots’ or to put his character back into the sorts of situations that he’s most famous for, is precisely the same situation that I feel Michael Murphy is in here.  Part of the great appeal of the Jake and Laura books has been the famous historical figures with whom they’ve rubbed elbows.  Whether it’s giving song advice to a famous song writer, or aviation advice to a famous aviator, Jake and Laura really shine when they complement great historical figures and have a mystery to solve.

Also, we left Jake and Laura at the end of the last book on the verge of something big, something like a world war, and the potential for some really dramatic mysteries.

This book feels like an interlude – like something that could have been written at any time to have on hand.  Still, I consider myself a fan of Jake and Laura and I’ll read any of their mysteries. This current installment may not be in keeping with what has already been established, but it’s still a good story with good characters.  It’s just a little leaner than the others to date.

Looking for a good book?  The Big Brush-Off by Michael Murphy is the latest in the Jake and Laura Mystery series, which departs from the usual high drama and famous figures stories of the previous books  If you don’t mind a cozy mystery with a tough writer/detective and his famous actress wife, then this is the right book for you.

series: A Jake and Laura Mystery #4