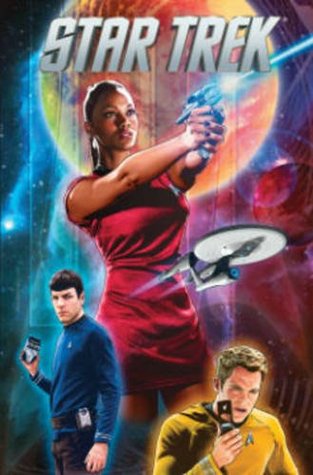 Clearly I’m letting a bit of my geekiness show through in that I am review a fair amount of Star Trek related books and graphic novels.  I have to admit I enjoy the nostalgia of entering this world that I enjoyed so much back in the 1970’s.

This particular graphic novel, Volume 11 in the Star Trek series, published by IDW, contains three stories featuring the crew of the U.S.S. Enterprise , the first two stories with the J.J. Abrams reboot in mind.  The first story is “The Tholian Web” and retells the story of the Enterprise‘s first encounter with the Tholian race.  The second story, “Deity,” is a first encounter story, featuring Sulu on his first away-team command.  Third is a short, one-shot special story titled “Flesh and Stone.”

I was not much of a fan of this first story, “The Tholian Web.”  It is both the same story we know from 1968 and yet a very different story.  It manages to capture the uncertainty surrounding this first encounter with an unknown alien race and the danger and fear of an unknown (spatial interphase) which is a part of the original story, but it completely fails to tell a story about humanity – the struggle to deal with the loss of a commander and friend while suffering from crippling psychosis is just as much a part of this story.

In addition to a story that is lacking is some artwork that is generally pretty poor.  The characters are mostly recognizable but figures are often out of proportion and cartoony.

“Deity” was, in many ways, a much more interesting story.  Sulu given his first field command had a nice subplot, but the story of investigating a ‘new’ race, the use of a new technology that fails and the conundrum of what to do when contact is errantly made.  The story proves to be interesting but in an odd way both rushes through the plot and pads the story unnecessarily.  The problem is focus.  Perhaps too much is being attempted in a short story and while it can offer up a number of different small stories it doesn’t really have time to develop any of them well.

The artwork here is very nice … some of the best I’ve seen in Star Trek graphic novel.  It’s a little bit sad that this art talent is ‘wasted’ drawing giant chickens and roosters.  Yes … the alien race being observed here is a race of giant chickens.

“Flesh and Stone” was perhaps my favorite piece here and I’ll admit that this is likely because it features the Kirk, Spock, McCoy of the original series and not the characters as portrayed by Pine, Quinto, and Urban.  And while it’s only a panel or two, part of the bridge crew includes Lt. Arex, a character I always wished to see more of.

This story features all the doctors from the series franchise.  Pulaski, Phlox, EMH, Crusher, and Bashir meet for a medical conference.  Aboard the ship carrying a crew of medical personnel, something strange has afflicted people, slowly turning them to stone.  Because Crusher, Bashir, and Pulaski were late getting to the meeting, and EMH is a hologram, they are not infected with whatever is happening.  Searching the database, EMH sees evidence of something similar happening a very long time ago, but the records have been erased.  It’s up to Bashir, Crusher, and Pulaski to track down the aged Doctor McCoy to see if he remembers the incident that has been erased and if he can help them recreate a cure.  McCoy recalls an incident that involved Tholians and a virus that they planted, but with the help of lecturer and doctor Phlox from the academy, they were able to create a cure.  Fortunately, the old Admiral McCoy still has the records on one of his tricorders, which he hands over.

Not a deep, involved story, but not just a shoot-’em up action piece either.  It was just what you might expect from a twenty page story.  And the artwork, while not as strong as the preceding story, was very good.

This issue of the graphic novel has a real variety of quality, just in three short pieces, and that’s sort of indicative of the series on a whole.  Sometimes you’ll be pleasantly surprised and sometimes you’ll wonder how a story ever got into print.  But because I’m a fan of the series, I’ll keep reading these books as well (and we know that’s what the publisher is counting on).

Looking for a good book?  Star Trek, Volume 11 is a graphic novel with some really poor art and weak stories but also with some very nice and interesting fiction and some really strong art.  If you are a fan of the series, you’ll probably enjoy this.