NIGHT AND THE ENEMY – graphic novel 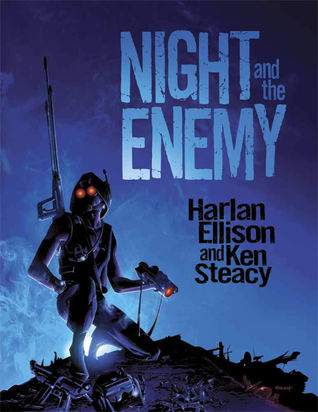 Harlan Ellison is one of those writers that people tend to either really like or really hate.  I fall in to the former category.  I’ll buy anything with Harlan’s name on it, and have since 1975 when I first discovered him for myself.  And one of the things that I have liked about Harlan’s career is that he works in a variety of mediums – from fiction to essays to television to graphic novels.  And I will admit that I haven’t kept up with his graphic novel work as much as I have his other writings.  And maybe, now that I’ve read this, I now know why.

When Harlan Ellison writes fiction, his imagination is his canvas and he uses words to paint incredible pictures.  When he writes specifically for the graphic novel, he understands that the artist does some of the work and he backs off, ever so slightly, from painting the full picture.  And if you have one of the more brilliant graphic novel artists who can keep up with the quality of an Ellison story, the output could be stupendous.  But on the other end … if the artist can’t do Ellison justice, the output could be a disaster.  In this case, it is the latter.

Ellison’s five stories here are decent, though not necessarily his top works, but still … it’s Harlan Ellison and worth reading.

Ken Steacy’s art is tremendously lacking.  Don’t be fooled by the cover as seen above.  If you haven’t already learned this, the cover art on graphic novels is rarely as eye-catching or as strong as the work inside.  Steacy’s art is full of vibrant colors.  At times, it reminded me of the coloring in Richard Corben’s artwork (as I remember it from the early days of Heavy Metal magazine), but there (colors) the similarity ends.  Despite shadings and fore-shortening, Steacy’s artwork is terribly flat and uninteresting.  This work was much more the work of an amateur than a seasoned professional.  Which is not to say that all amateurs aren’t capable of producing strong works, it just happens that in this case, the artist isn’t ready for this level of exposure.

It’s hard to overlook the art to review the story when discussing a graphic novel.  The stories have a common theme – they each relate to Earth-Kyba (an alien race) relations and war.  The first story, “Run For the Stars” was my favorite and was very Ellison-esque.  Humans are about to evacuate a planet but they don’t trust the Kyba so (giving the Kyba a reason not to trust humans) the humans plant a bomb inside one man and leave him alone on the planet to fend off the aliens.  I also enjoyed “The Untouchable Adolescents” in which a race of very young aliens have learned not to trust outsiders, so when the earth men say they are there to help because the planet core is not stable, the aliens  (or locals) don’t want their help.  But of course learn too late that they do need help.

I liked the premise of “Sleeping Dogs” but the story lacked some substance (this felt like it was written specifically to tie in to the collection, and rather hastily).  “The Few The Proud” felt like a Vietnam commentary.

This is perhaps one of my least favorite Harlan Ellison collections, but I’d still read some weaker Ellison over many other writers.

Looking for a good book?  The reissue of Night and the Enemy, by Harlan Ellison and Ken Steacy features some typically Ellison fiction with some not quite great artwork.

Night and the Enemy