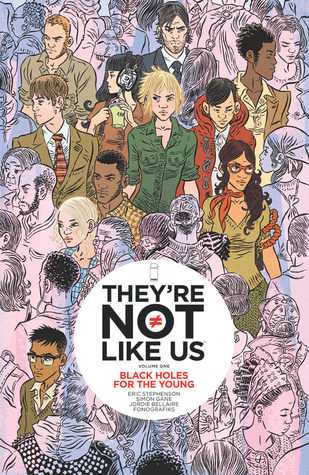 A teenage girl is about to kill herself by jumping from a hospital roof.  She suffers from constant noise in her head that she can’t shut out or just make quiet.  But just before she ends it all a man appears and takes her away.  The girl is a telepath and she hasn’t learned how to tune out all the constant thoughts she’s hearing from people around her.  The man who takes her away is called “The Voice” and he is the leader of a small band of similar misfits, each with ‘powers’ that make them different.  And while the similarities to the comic franchise X-Men is quite apparent here, it’s here where the similarity ends.  These teens are not heroes, harnessing their powers for good, but they straddle a line between doing good and committing crimes themselves.

The Voice instructs the girl on some of the rules of the house (a house that they simply took [because they can]) which includes being given a new name and never using the old name and killing your own family in order to not having any ties to a previous life that can be used against you.  The girl, Syd, while not having a strong attachment to her parents, isn’t sure about the idea of actually killing them.

It turns out that despite the faithfully following of The Voice, there is a lot of discomfort and discontent among the misfits. The Voice would like to simply get rid of Syd, but his closest friend in the group is a clairvoyant and insists that Syd stays with the group in the future that she can see.

Despite being only 138 pages long I went from liking the book to disliking the book to really liking it, to hating it, and back again.  It’s clear that author Eric Stephenson is pushing some boundaries while taking some typical teen angst toward parents and pushing those feelings to the edge (and then some).  And perhaps as someone well beyond those teen years I can’t quite relate and it makes me a little uneasy.

There is, however, a nice message in here, behind the ’emo’ and angst of the teens.  There is the message that even if you get out of a bad situation you have to guard against being taken advantage of.  That it still takes strength to stand up for yourself.  In some ways, this message is too obvious, but again, that may be the ‘well-beyond-teen’ in me.

The art by Simon Gane and Jordie Bellaire works very nicely.  It is consistent and easy to look at, with a slightly stylized look.  I think that this would go over very well with the intended target audience.  I wasn’t overwhelmed with awe by it, but I never once found it distracting.

Overall, I give this a thumbs up, though there were definitely times that I wasn’t enjoying the read.

Looking for a good book? The graphic novel They’re Not Like Us, Volume 1 is a good read for a YA audience.