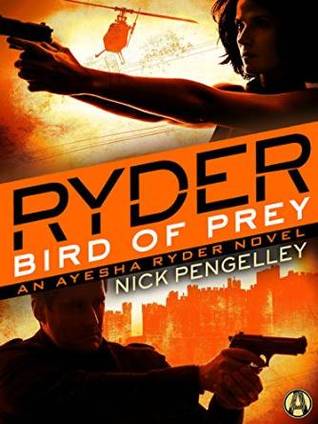 Ayesha Ryder is a an adventurer, much like Indiana Jones, and in this book, she’s on the hunt for the Maltese Falcon, a real item of legend (though it looks much different from that in the movie) which supposedly lead the owner to another item of legend: the sword once owned by King Harold of the Battle of Hastings.

When Ayesha meets with her contact, she finds him dying, the victim of an assassin.  Ayesha knows she’s likely a target now and seeks to escape.  At this time, the British Prime Minister, a friend of Ayesha’s, is also assassinated (poisoned) and all the evidence points to Ayesha as his killer.  She now needs to evade her own associates as well as those out to kill her.

To aid in her flight, she teams up with Joram Tate, a librarian, and together they need to prove Ayesha’s innocence and stop the downfall of the United Kingdom, while searching for clues to the legendary treasure.

Ryder: Bird of Prey is the third book in a series by Nick Pengelley.  This is the first book I’ve read and I didn’t feel I had missed out on too much.  The book stands alone on its own adventure.  There are references to people and/or events that I presume occurred in one of the earlier books, but the necessary information was provided to keep me reading.

Ayesha Ryder strikes me as an attempt to create a female adventure/thriller hero, ala Mack Bolan or The Executioner, which I thought was a pretty good idea.  Unfortunately, I was never able to relate to Ayesha or to any of the other characters in the book.  Although there was a great deal of mentioning sexual attraction,  there was never any chemistry between the characters and the talk seemed to be to let the reader know that they were attracted to one another instead of just showing us.  And Ayesha’s skills in fighting were a little beyond real – which is okay in this type of story – but while we are told she’s got her doctorate (which should make her totally bad-ass … smart, good-looking, AND a fighter with crazy mad skills), she often makes the worst choices, relying on fighting rather than thinking things through.  The better adventure heroes (and I include James Bond and Indiana Jones in this category) rely on all their skills in equal measure.  Ayesha seems to fall back to the fighting and never considers all the angles first.

I have to admit that I didn’t expect a lot of character development in a book of this type, but I felt that there was even less than I was expecting.  These weren’t even interesting stereotypes.  The idea … the hunt for the historic and legendary artifacts … is what got me through this book, but I can’t really recommend it.

Looking for a good book?  There are a lot of adventure hero books to choose from, and while Ayesha Ryder, in Ryder: Bird of Prey, by Nick Pengelley, is an interesting concept, it just doesn’t live up to all the adventurers who have gone before.