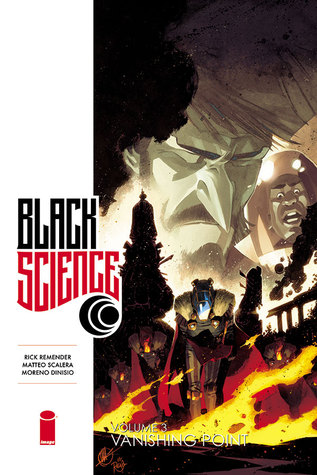 The art in the Black Science graphic novels is some of the most original, stylized concept art I’ve seen in a comic or graphic novel and it works so well.  Matteo Scalera’s work really stands out in this series.  If only the story could live up to the art.

I reviewed the first book in the series back in July of 2014.  You can see that review here.

The story: a team of inter-dimensional travelers are trying to return home, but their ‘pillar’ (the device that helps them hop from time to time) isn’t working correctly.  In the current dimension (as we begin this graphic novel) the travelers are just getting out of a mess that must have been featured in Volume 2 (which I have not read) in which the sentient life form was studying Grant (the leader of our band/family of dimension hoppers) as a potential host for a symbiotic life form.  Then using the pillar, he jumps “for weeks” trying to get to his family and winds up in a dimension with an alternate version of his family.  To complicate his life (as if it needs it), there is a devastating disease on the planet which may well have come from the hoppers and they struggle with a moral dilemma … stay to find a cure (despite the fact that they are being hunted for bringing the disease) or abandon the planet and leave them to their fate?

The first volume was interesting and showed a lot of promise, though I hoped it wouldn’t become just a “Lost in Space”-styled story for comics.  I missed volume two, and this third volume really doesn’t capture my interest.  In the 120+ pages of the book, I mostly read a lot of arguing and some heavy moral dilemma contemplation.  The story jumped around in flashbacks, and there was more family drama.

I initially liked this series and I thought it had a lot of potential and a great concept.  But with this third volume, I feel that the characters are bringing the concept down.  I haven’t felt connected to any of the characters and the situations they are finding themselves in don’t really excite … and they should!  This is a problem with the story-telling – when a tremendous idea doesn’t build well to a climax.

I may give this series another shot, but my hopes for this book are falling.

Looking for a good book?  Black Science Volume 3: Vanishing Pattern fails to live up to the promise of the first volume, and is still looking to define just what the bigger story is about.