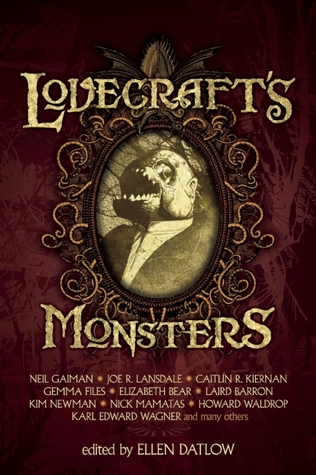 There appears to be a resurgence of interest in the works of H. P. Lovecraft.  I’ve read a good number of books with Lovecraft’s name in the title, and seen many more.  Lovecraft’s mythology-building and god-making was legendary and his creations still stand the test of time, hence an anthology based on some of his creations.

Ellen Datlow has put together this collection, culling stories from other works and commissioning others.  I’ve been impressed with the books that Datlow has edited before (of those I’ve read, of course), so I suspected that this would also be a top-notch anthology, and indeed it is.  Too often I’ve read anthologies on a theme where many of the stories fit the theme only by the barest of margins.  That is not the case here.  The discerning Lovecraft fan should be able to see how these stories do, indeed, fit in the Lovecraft’s Monsters theme.  I found that it definitely helped serve as a reminder to have the monster index at the end of the book (it’s been a long time since I read Lovecraft’s work and not a derivative of them).

As with most anthologies or collections of short stories, my enjoyment of the works will vary.  I very much enjoyed the story by Neil Gaiman (and it is probably the most anthologized of the bunch), and some of the other better-known named authors (to me, at least), such as Karl Edward Wagner and Joe R. Lansdale and Laird Barron, put forth some wonderful stories.

“Black is the Pit, from Pole to Pole” by Howard Waldrop and Steven Utley was perhaps the one story that didn’t fit as well in to the theme.  Instead, it primarily features Frankenstein’s Monster rampaging through the subterranean tunnels that scour the earth.  This is a Mary Shelley/Jules Verne mash-up more than a nod to Howard Phillips Lovecraft.

I’m also not one to enjoy poetry, so the two short poems by Gemma Files were not something that went over well for me.

However, the artwork inside the book was lovely.  The book is peppered with black and white art by John Coulthart and it is wonderful.  The images are haunting and eerie and a really great addition to the book.  It’s too bad that his name isn’t more prominent.  I could only find reference to John Coulthart being the artist from the copyright page.

Looking for a good book?  Those who enjoy reading Lovecraft, should enjoy these short stories, mostly based on some of Lovecraft’s creations.