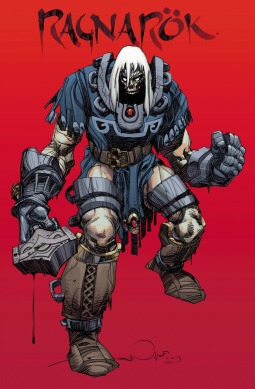 I request a lot of books for potential review, and sometimes I’ll request a book but will have reservations about the title before I read it. Such was the case with this graphic novel.

I’m a fan of Norse mythology and I’ve been really delighted to see an increased interest in this mythology.  And of course I’m a sucker for anything that draws upon these myths.  At the same time, I was a little worried to read yet another Ragnarok story featuring the god of thunder, Thor. Even though the Norse myths are just starting to hit a stride, I feel that we’ve already had stories about the end-of-times battle of the gods.

In the story, the gods have fallen at Ragnarok.  In the surviving world, inhabited by draugers (walking dead), trolls, and elfs, a dark elf bounty hunter is out to destroy the ‘stone god’ — a manacled drauger/god who wakes , thanks to a greedy mercenary with the elf.  The god is Thor, not quite alive, not quite dead, has no knowledge of what has happened at the battle or what has happened to the other gods.  Upon waking, he ventures out, seeking answers and his other gods.

This story is epic.  I don’t use this term loosely (or often), but in this case it fits.  It is an epic story and it is so well told!  Author Simonson clearly understands the medium and does an exceptionally fine job of building the story within the 21-page comic book, but also building a story for the longer graphic novel, while also clearly building a much larger story that will span multiple graphic novels.  This is not an easy feat, but Simonson handles this with ease.

We are also both captivated and revolted by our god, Thor.  This is not the god of the long blond locks that we see on the movie screen or in the Marvel comics.  This is a god who died in battle and lives on: lost, confused, frightened, but still frightening and powerful and determined.  Just reading this I was somehow in awe of this god’s power … something I don’t typically sense from graphic novels.

This is the complete package.  In addition to a well-crafted story and truly engaging characters, the artwork here (I presume also by Simonson as it is otherwise not credited) is fantastic!  It is bold, sharp, and powerful.  The coloring is some of the best I’ve seen in a graphic novel in the last few years (I think I’ve only praised the coloring in a visual book like this once before).  I can flip to any page and look at art that is appealing and striking.  There isn’t a bad panel here.

This is what a graphic novel is supposed to be … the perfect blend of story, character, and art. I would recommend this book even to those who’ve never opened a graphic novel before.

Looking for a good book?  Behind the uninspiring cover (as seen at the top of this post), Ragnarok, Volume 1: Last God Standing, is a graphic novel that will draw you in with the stunning art, hold you with the fascinating tale, and have you cheering for the protagonists who terrify you.  If you buy only one graphic novel this year, you will want to make it this one. (And since it’s being released just in time for the holidays…it makes a great gift!)