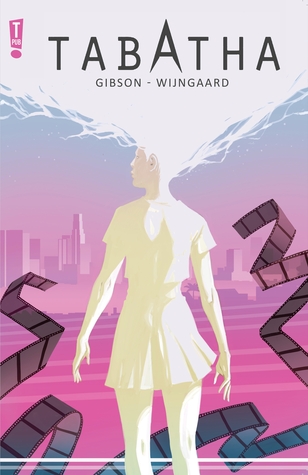 This is a pretty great cover, as depicted above, even though it doesn’t tell you anything about the story or the characters (it might suggest that this takes place in Hollywood, given the film strips).  And while it’s pretty common to have a cover art on a graphic novel that is not represented inside, I don’t think I’ve seen it this different before.  This cover suggests a wild, light fantasy featuring a young woman (hence the title).  Look at the hair on the figure.  Look at the colors.  Instead what we have is a story of an over-weight man obsessed with his sex doll to the point that he sees her (through his rose-colored glasses) as real and will kill and maim to protect her.  Yeah…I get that from this cover (~sarcasm~).

The story…there is a mailman in Los Angeles who is keeping tabs on who answers their door, who doesn’t, who isn’t home, etc.  He and his brother make plans to rob the empty places.  At one home, he makes a mistake as the home-owner is home.  He’s a bit of a shut-in, living with his blow-up sex doll who he sees as real.  He kidnaps the breaking-and-entering mailman, cuts off his hand, and sends it to his brother who tries to come to his rescue.  But his brother is also captured by the perverted loner.  When the crazy man sees the image of a girl in a text on the mailman’s phone, he thinks it looks just like his doll, so he goes and kidnaps her, dressing her up in “Tabatha’s” clothes.  Will the last of their friends find a way to save them?  Does it really matter?

This story is so weak.  There is nothing here to hold one’s interest.  I don’t have a clue why we should care about any of these people.  In most books I can find at least a character or two whom I would want to meet; perhaps talk to at a party or go out and have a drink with.  I would cross the street to avoid every one of these characters.

The art is serviceable.  It is clean … not muddied up with excessive detail or cross-hatching or splatters of air-brushing.  And all the characters are consistently identifiable throughout (which should go without saying, but sadly is not always the case).  But it’s not … well, I guess it’s just not very exciting.  This is a graphic novel.  The pictures are a major part of the story-telling, but this art just barely enhances the story (which shouldn’t be hard to do).

I don’t mind dark stories.  I enjoy a good grindhouse flick from time to time.  But they all still have to have SOMEthing that engages the reader.  I didn’t find anything here.

Looking for a good book?  Me, too, because this one doesn’t work.