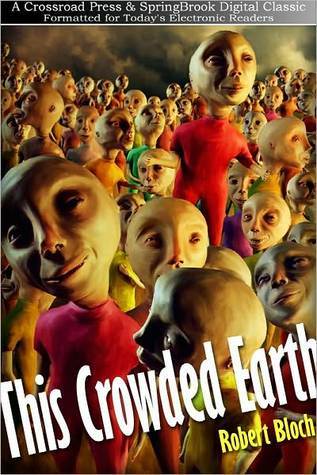 In 1958, when this was written, the idea of over-crowding and population explosion were still only just being considered, but were not hot topics.  But like many science fiction authors, Robert Bloch was ahead of the curve on this one.

The story is about Harry Collins and we start in that distant future, 1997.  Harry, like a number of others, can’t stand the over-crowding and spartan conditions in which he is forced to lived.  He could upgrade to a larger space, but he would have to marry to do so, and moving up would also necessitate a much longer (five-hour) commute.

His desire to see change becomes an obsession and drives him over the edge (literally?) and he is sent to a hospital in the country.  There he has an affair with a nurse.  Except the nurse is not a nurse, but another patient who’s been ordered to have the affair with Harry.  In fact, the entire hospital is an experiment that the doctor is carrying out.

The story (novelette? novella?) covers most of Harry’s lifetime, as man’s reasoning and attempts to correct some of the problems created by mankind, backfire or point out just how ridiculous our decisions can be if we don’t address the issue (the attempt to solve the problem of over-crowding was to midget-ize the human race … to create smaller humans who don’t take up so much space).

Given my tastes in fiction, my preference for sci-fi, and the fact that I have typically really liked Robert Bloch books and stories, I really expected to like this story.  Unfortunately, I didn’t.

I thought that the characters were dull and the solutions comical.  Because Harry Collins did nothing for me, following him over the course of 60+ years felt more like torture than a pleasant read.  What got me through it was Bloch’s writing style.  The characters and the plot didn’t get me, but his story-telling does.  There is a reason that he’s a master story-teller, but there’s also a reason that even his fans aren’t clamoring for this book.

Looking for a good book?  This Crowded Earth, by Robert Bloch, shows its age with a rambling, rather ridiculous plot.  There are plenty of great classic sci-fi stories available, but this isn’t one of them.