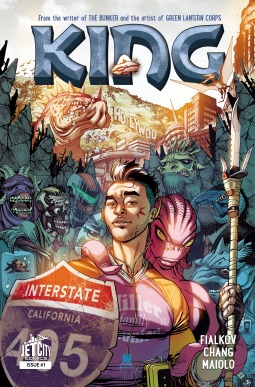 This isn’t a graphic novel as much as it’s simply the first issue of a new comic book series.  King takes place in the Los Angeles Valley in a post-apocalyptic world in which “King” believes he’s the last human left on earth.  But last human doesn’t mean last living creature.  In fact, the world (at least King’s world) is inhabited by a variety of mutant creatures – some living, some created (such as the giant Karate Robot Bear which shoots pink gas from its nipples … yes, you read that correctly).

King appears to work for a beak-nosed reptile and he’s seeking the Seed of Life (whatever that is).  At the end of this first issue, King is about to learn something very important.

I wasn’t sure what to make of this book.  The art was attractive and I have nothing against post-apocalyptic stories, but there was something about this book — as if it were trying to be too cute and clever — that I couldn’t enjoy.

Even a made-up world needs to have some sort of rules in the world-building.  But the strange assortment of creatures that we meet on nearly every page in this short book don’t seem to have a history, nor do they seem to come from the same world.  But somehow, while road-signs haven’t rusted away and there are couches to sit on and cars that litter the streets with only cracked windshields, a mutation has occurred to allow animals to mutate and become a clothes-wearing, cigar-smoking , dominant life form on the planet.

I’ve read a lot of sci-fi and I’m more than willing to suspend reality and disbelief, but this pushed past even my liberal way of thinking.

Looking for a good book?  The comic King #1 might appeal if you enjoy post-apocalyptic strangeness, with some decent art, but I’d wait for a graphic novel compilation, to see if there’s much of an interesting story developing.