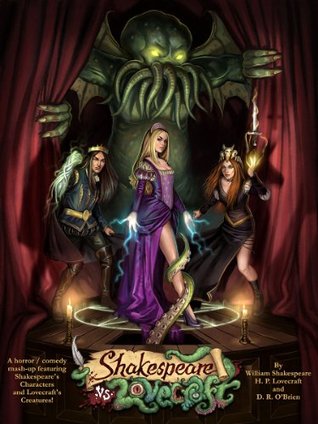 A year or so there was a quickly moving fad in fiction to combine existing works of literature with some form of horror stories, whether zombies or vampires or you-name-the-horror.  Of this variety, I’ve read through a couple of them and was entertained enough that it wasn’t a complete waste of time.  This variation, combining a variety of Shakespeare’s characters, with the horrors of Cthulu and H.P. Lovecraft’s nightmares is another fine, but not outstanding, entry into the horror mash-ups.

If you stop to think about it, Shakespeare has a number of stories that straddle the genre line of horror, or at least the fantastic.  After all, it is in Shakespeare that we meet a ruthless killer who is haunted by the men he’s murdered; a wizard who controls the elements on his own island; fairies; un-dead (ghosts); an alien monster of unknown origin; and gods.  Put some of the characters in situations with Lovecraft’s creations, and you have some fun possibilities.

What works here is the simple fact that the joining of these stories/characters is very natural.  In some cases it is almost as if the stories write themselves.  What Shakespeare’s character face don’t seem to be too much of a stretch from what they face, or at least imagine, in Shakespeare’s stories.

What doesn’t work is something that bothers me in all Shakespeare-adapted stories … the desire (need?) on the part of the author to include some of the famous lines in a different context.  I just don’t understand this.  Is this a case of the author trying to prove how clever s/he is?  For instance,  (one of the few that stood out for me) we have the line “Is this a dagger which I see before me?”  This is a great line spoken by Macbeth from the play of the same name.  In this case, the line is spoken by Richard III as Lady Macbeth is about to kill him.  Is this a clever use of an existing, famous quote?  I personally don’t think so.  I found it more distracting than clever.

The worst example of this would be near the end of the book,

Romeo, glancing quickly at an exit route through the fighting throng, sprang nimbly away from the Englishman and made a dash for the Castle.

The corpse-king emitted a blood curdling laugh as the youth dashed in and out of clusters of the warring factions, mockingly calling after him:

First, you should know that this line is not spoken prior to this point in the book.  The corpse-king is not mocking by repeating something it heard earlier.  Secondly, in this case, with Romeo dashing away, it would appear that the word “wherefore” is being used to ask “where.”  Any eighth-grader knows that this is incorrect.  And while you can get around the fact that this is incorrect by reminding the reader that it’s spoken by a corpse-king and it’s ‘mocking,’ the question remains … how does it know to speak this line to mock Romeo and not know the meaning?

Overall, this was a fine bit of escapism and something that could appeal to fans of both Shakespeare and horror fiction (are there many like this?) but it’s not a book that I could recommend.  This is the sort of book that if you saw it on your library shelf and it looked appealing to you, it wouldn’t be a waste of time.