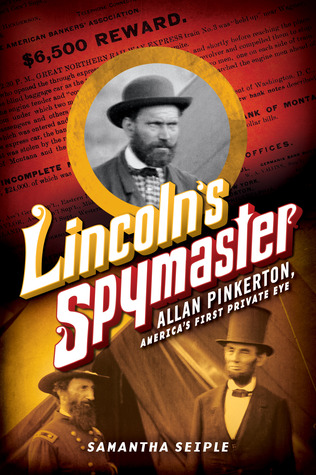 This teen and tween biography of Allan Pinkerton, by Samantha Seiple, is just the ticket to get students interested in reading non-fiction.

Lincoln’s Spymaster is an easy, engaging read.  Seiple’s writing moves along crisply, telling us what we need to know and making the work of the spy, Allan Pinkerton, sound exciting and dangerous (which it surely was).  The book is broken down to two parts, the first following Pinkerton and some of his associates, as spies during the Civil War era.  What turned out to be a case of protecting the president (Abraham Lincoln) started out when the president of the railroad was concerned that there were plots to blow up train tracks.  The details of Pinkerton’s involvement are fascinating, and his use of disguise to infiltrate the plot has all the makings of a modern-day thriller.

The second half of the book follows a slight change in Pinkerton’s work as he moves being a spy to what today we might refer to as a bounty hunter, chasing down criminals.  In this portion of the book we learn that Pinkerton crossed paths with some of the most notorious outlaws of the wild west, and the very name of the Pinkerton Agency became synonymous with successfully “getting their man.”

The Pinkerton’s suffered a few set-backs, including not being able to protect criminals they had captured, from being killed by lynch-mobs, including criminals that were turned over in an extradition from Canada (which created some bad relations with our northern neighbors for the government).

The book is well-furnished with photographs.  My ARC didn’t have the pictures identified, though many of the pictures I recognized from other history books, and more were fairly easy to determine what they were representing.

For an adult reader, this book is very easy reading.  I read through the entire book in a bit over an hour.  It will be similarly easy for teens to get caught up in this book.  It moves along well and is very exciting, with lots of great history.  This is a case where people will learn something, without realizing that they are learning!  I wish I’d had more history books like this when I was a student!

Looking for a good book?  Lincoln’s Spymaster: Allan Pinkerton, by Samantha Seiple, is a wonderful biography for teen and tween readers and is sure to capture and hold their interest.