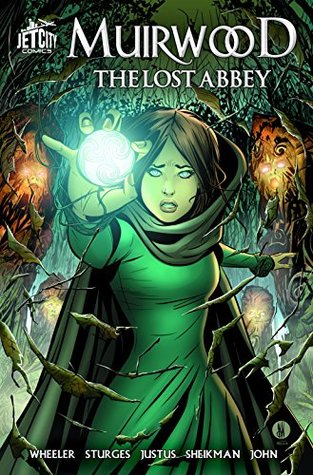 Author Jeff Wheeler and his publisher, Jet City Comics, is trying something a little different.  They are trying to use the Kindle in a slightly new format, producing a serial graphic novel that will be delivered to Kindles monthly.  This title is set for five consecutive issues.  So…a monthly comic book that is digital only?  That’s new?

As to the story… a young girl (teenager) has been banished from her home by her father, the king.  But now he needs her to perform some sort of errand/quest.  The girl, Maia, strikes a bargain with her father.  She’s supposed to investigate an Abbey that may be haunted.  For doing so, she wants to study in Muirwood, which has significance to the two of them, but not to the reader, yet.

This is only about thirty pages long, so not a lot gets accomplished. Though on the other hand, a great deal of thinking happens.  There’s a narration that underscores (or overscores) the dialog in the book.  This narration grows tedious.  It serves to make Maia a very melancholy teen.  It’s one of the few times I’ve ever read a graphic novel and felt like I was clearly reading a Young Adult story, with angst-y teen girls facing off against parents who don’t have a clue.  I was not impressed by the story and I’m unlikely to read the other graphic novel serials as they come out.  I do have two of the novels (Wheeler is crossing genres with this series) in the Muirwood universe, which I will read, though this book has greatly reduced my interest in the series.

The art was not particularly good.  The covers are wonderful, but it’s not uncommon to have a different artist produce the covers.  The interior art lacked consistency, characterization, and depth.  Even the layouts try too hard to be clever, rather than simply telling the story (for instance … on one page, two panels prominently focus on a spider on its web in the corner of a room, for no reason other than to show a spider in the room, followed by a panel with a mouse and some crumbs in view).

My biggest question is “who is this targeted toward?”  This really feels like a Young Adult fare, and the art feels as though it has a junior high quality about it, but there’s something else I can’t quite put my finger on that feels as though this is being aimed at the general fantasy reader.  I hope I’m wrong.

Looking for a good book?  This digital graphic novel serial issue of Muirwood: The Lost Abbey is to pave the way for future digital comic issues and a series of books, but it gets off on a rough note with poor art and a rambling, heavy narrative.

One comment on “MUIRWOOD: THE LOST ABBEY – graphic novel”