STAR TREK/PLANET OF THE APES: THE PRIMATE DIRECTIVE – graphic novel 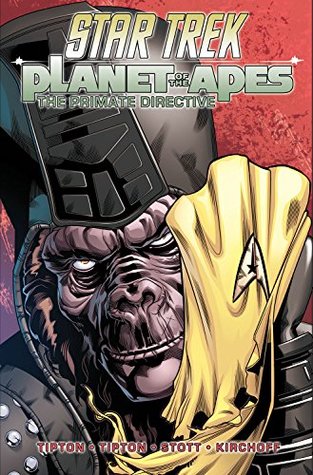 Apparently I’m not the only sci-fi geek old enough to remember the original Star Trek AND the Planet of the Apes franchise, otherwise why would anyone bother to do a cross-over with these two science fiction classics from the 1960’s-70’s?

At the time, I was just the right age and stereotype to be enjoying the ‘Apes’ franchise.  I was a white, middle-class teenage geeky boy who saw the last couple of Apes movies in the theater when originally released, and I faithfully watched the Planet of the Apes television show despite its short run.

But while I would have called myself a Planet of the Apes fan 40+ years ago, I can’t say that I’ve read or watched much since — not even the reboots.  So I was cautious about reading this.

The story follows Star Trek‘s Captain Kirk and the crew of the Starship Enterprise as they follow a Klingon ship into a vortex.  It happens to be their old foe, Kor, and the earth-like planet is the same one where apes rule.  Kirk and crew beam down and we join a story that many of us are already familiar with.  Taylor and Nova have just made their escape and we’re near the end of the first Planet of the Apes movie.  You should know both the histories of Star Trek and Planet of the Apes to understand what’s going on and the relationships between the characters; but if you aren’t already familiar with these franchises, it is unlikely that you would pick up this book.

This really isn’t so much a crossover as it is a “what if” book.  What if the Enterprise found themselves in this alternate Earth where the apes became the dominant species?  But even a “what if” book needs a story, and a story needs drama.  There isn’t a lot of drama here.  The entire story seems to revolve the very simple premise of “does the Starfleet Prime Directive apply when in an alternate universe?  Now try to add an ape uprising/mutiny which doesn’t really work because of their prime law (‘ape shall never kill ape’) and we’re left with a pretty weak story.

The ‘what if’ works pretty well and we manage to stay in line with the continuity of the Apes series pretty well … as if Kirk and crew arrived right at the end of the first movie and disappeared before the start of the second film.  And this is fun (and I’m sure the creators would have heard from angry fans if the continuity had NOT held true), but I still want a little more in my reading.

Looking for a good book?  The Star Trek/Planet of the Apes crossover graphic novel doesn’t offer much beside the joining of two pop culture icons from the 1960’s70’s.

Star Trek/Planet of the Apes: The Primate Directive