HE DRANK AND SAW THE SPIDER – Alex Bledsoe 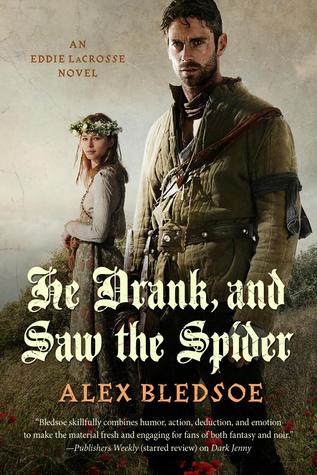 When I received a digital ARC (Advance Reading Copy) of a book, I don’t usually know much about the book or the author unless I am previously familiar with them.  With this particular book, I came in completely blind.  I have only later learned that this is the fifth book in a series about the main character, Eddie LaCrosse.  I can not comment on how this fits within the series.

I was definitely and immediately engaged in the story and we begin with a rather exciting moment.  Eddie encounters a man who is being mauled by a bear.  Eddie arrives too late and is not able to save the man, but before he dies, he entrusts Eddie with his valuable cargo … a baby girl.  He asks that Eddie look after his safety.

Eddie is not a family-type man and he brings the baby to a nearby shepherd and begs that the family raise the poor girl whose guardian died trying to protect her.  The family agrees and Eddie goes off to his mercenary ways.  Now…sixteen years later, Eddie returns to the little village where he left the baby, wanting to check up to see how things are with the little girl.  But of course the girl is now a beautiful teen and she’s at the center of a fight between two rival kings and a prince and a variety of monsters and sorcerers.

Though my interest was captured early, I quickly lost interest in the book.  It seemed as though there was a history to Eddie, but I never understood how this story tied in to his history.  I also felt that other characters came and went rather randomly.  When it served a purpose for the moment, a character would appear, but if I expected to get more or see a character again, it wasn’t guaranteed.

When reading fantasy, or more specifically, sword and sorcery, there are some expectations or at least things readers are willing to accept — typically some good sword fights and some magic that threatens the equilibrium.  These things are present in the book, but it’s almost stereotypical, with little to set it apart from similar work in the field.  I wouldn’t be opposed to reading another Eddie LaCrosse novel, but I’m in no hurry to seek one out.

Looking for a good book?  He Drank and Saw the Spider is average fantasy/sword-and-sorcery fare which may appeal more to fans of the Eddie LaCrosse series.

He Drank and Saw the Spider