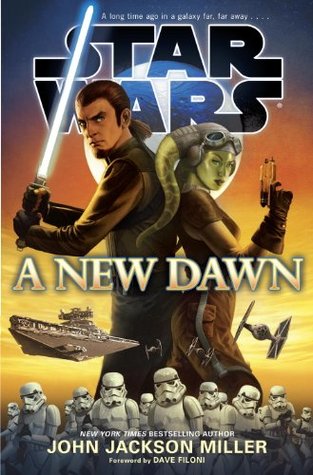 After the first three Star Wars movies came out, I read any Star Wars book I could get my hands on.  Anyone else remember those Brian Daley novels?  Then, for a very long time, I didn’t read a single tv or movie tie-in.  Now, thanks to book reviewing web site, I’ve had access to a number of Star Wars novels.  Though I haven’t read what would be called an abundance of these books, they’ve definitely run the gamut of being exceptionally top-notch to down-right bad.  This one, A New Dawn, reads like cheap, pulpy fan fiction.

This book is supposed to bridge the gap of the two Star Wars trilogies, ‘expand’ the fictional universe, and be a part of the Star Wars canon.  This is apparently clear to all SW geeks.  I understand what it means, but really don’t care.  I’m looking for a good story.  The problem that I found was that in trying to fit in to all sorts of molds the story got a bit lost.

My teenage boys were once huge Star Wars fans.  They came to it through the ‘Anakin’ trilogy.  I was once a huge Star Wars fan, coming to it from the ‘Luke/Leia’ trilogy.  And then the animated series came out, and we hoped to keep the joy alive, but rather than sticking with what worked, the animated series tried to become more inclusive and more encompassing, and we grew bored.  This book feels just like that animated series.  Boring.  With characters included not because they were necessary for telling the story, but to introduce new characters and to try to be inclusive.

We should also be clear that while telling a story about mining and its importance to military can be interesting (wars are won and lost on the ability of one side to get supplies), its pretty hard to tell a Star Wars type story around mining.  Star Wars was patterned after the old pulp-like serial movies in which the hero(es) got out of one scrape, only to find themselves in another and the plot involved moved from action point to action point.  All six movies seem to have carried this theme, and I think some of the best books have also maintained this idea.  This book did not have enough action to keep me interested.  It did not have any characters that I found outstanding (it seems to me a pretty odd idea to be a book that bridges a gap but doesn’t include any of the characters from either side of the bridge).  If this were a stand-alone sci-fi book, it would be dead in the water.  The only thing that it has going for it is that it includes Jedi’s, the Force, light sabers, stormtroopers, and other Star Wars-related gadgets and terminology.

I’ve read some pretty good Star Wars novels lately.  This was not one of them.

Looking for a good book?  You probably need to be a really hard-core Star Wars fan to appreciate this book, and even then, it doesn’t offer too much, other than some new characters.