LEATHERHEADS OF THE NORTH – Chuck Frederick 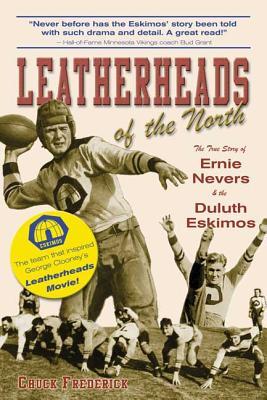 If you pick up this book because it was the inspiration for the George Clooney movie, Leatherheads, you might be disappointed (depending, I suppose, on how much you liked the movie).  But if you choose to pick up this book because you are interested in history, or football, or even the sociology of ‘entertainment/sports’ through history, then this is a must read for you.

I first became interested in this after visiting the Football Hall of Fame and seeing the display for the Duluth Eskimos.  I wasn’t aware, at the time, that there had been such a team, and with a strong connection to Duluth (immediate family having lived and currently living there), I was instantly intrigued and looking for more information about the team.  Fortunately, I came across this book.

Professional football has not always been the high-priced, high visibility entertainment that is it today.  When the Duluth Eskimos were a professional football team, during the 1920’s, football was a diversion for some and the players not only weren’t always paid, depending on the gate receipts, they sometimes paid their own way to out-of-town games.  There also wasn’t the organization, or the oversight, that there is today.  Not all teams had similar schedules.  In 1922,

Four games.  Nine games.  Twelve games.  It was no wonder that at least once two different teams both claimed to be the league champions (this was LONG before the Super Bowl).

Just the amount of football history that is packed in this little book is amazing, but the detail of the Duluth Eskimos and their star, Ernie Nevers, is tremendous.  Much of the information comes down through stories told by team members, many years after the fact, and sometimes as told by descendants of the original players, so one has to take the stories with a little bit of a grain of salt, but even so, we are talking about an era when rugged men played football with leather helmets and ran into one another like long-horned rams.

Although the perspective may be a bit skewed, it was fascinating to read about how Ernie Nevers and the Duluth Eskimos may have saved the National Football League, and how the Eskimos, being so far north had a hard time getting other teams to travel to play them and how they spent nearly an entire season playing on the road. (“Played 13 regular-season games and 16 non-league games in 4 months — but played at home only once.”)

The Eskimos were the first team to hold a pre-season training camp, and to feature a team logo on their uniforms.  In today’s era, it’s hard to fathom that either of these were not regularly done!

I really enjoyed this book, mostly from a history point of view, but getting a sense of football when it wasn’t played for the money (or even, necessarily for the fame) was also quite enjoyable.

Looking for a good book?  History, Minnesota History, sports history, or football fans will appreciate this well researched and thoughtful look back at a professional football team that most have never known about, but sent three members of its squad to the Hall of Fame and possibly kept the sport of football alive during some tumultuous years.

Leatherheads of the North: The True Story of Ernie Nevers and the Duluth Eskimos

One comment on “LEATHERHEADS OF THE NORTH – Chuck Frederick”